10 of the World's Most Dangerous Roads 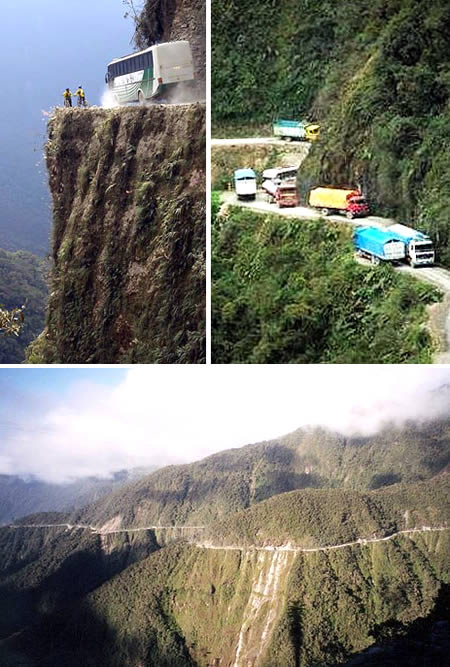 The North Yungas Road, also known as The Death Road, is a 61 to 69 km road leading from La Paz to Coroico (Bolivia's capital, to the Amazon region) in the Yungas region of Bolivia. It is legendary for its extreme danger: in 1995 the Inter-American Development Bank christened it as the "world's most dangerous road. " One estimate is that 200-300 travelers were killed yearly along the road. The road includes crosses marking many of the spots where such vehicles have fallen.

At the end of 2006, after 20 years of construction, a new road (a by-pass) from La Paz to Coroico was opened to public. This new route features modern construction (bridges, drainage, etc.), multiple lanes, pavement, guardrails and many other elements that make it considerably safer than the original route. As a result, the original North Yungas Road is currently much less used by traffic, although an increasing number of adventure travelers bike it for the thrills. 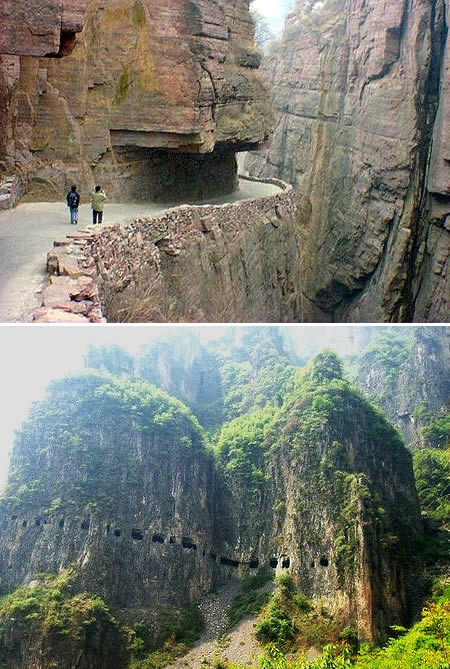 The road in Taihang mountains was built by local villagers: it took five years to finish the 1,200 metre long tunnel which is about 5 meters high and 4 meters wide. Some of the villagers died in accidents during construction; undaunted, the others continued. On May 1, 1977, the tunnel was opened to traffic. It is located in the Taihang Mountains, in the Hunan Province of China. 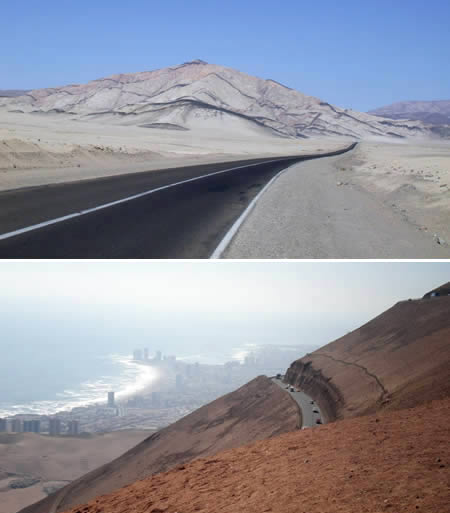 The road from Arica to Iquique is renowned for being dangerous; you drive past very deep valleys and wind your way through, spotting ever so often tell-tale vehicle skeletons at the bottom. The few times you can see cars and buses passing by, they were doing so at such a speed that you may think they are either tempting fate very foolishly or perhaps they are just ghosts whizzing past. The mono-hued and isolated scenery is well capable of endowing you with the capacity to have such visions, so concentrating and avoiding the use of any form of hallucinatory substance is essential here. 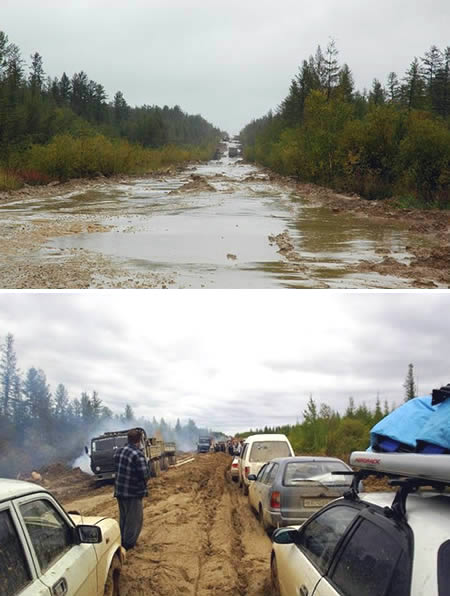 The Russian Federal Highway connects Moscow to Yakutsk, where the coldest temperature ever recorded outside Antarctica was recorded. Yakutsk is also the largest city built on continuous permafrost. Most houses are built on concrete piles because of the frozen ground.

What does all this have to do with being one of the world's most dangerous roads? Well, during the winter, which is approximately ten months long, driving in and out of Yakutsk is subject to heavy snow, ice, and reduced visibility. However, winter road conditions are a picnic compared to trying to navigate the Russian Federal Highway on July and August. Though many Siberian residents will tell you the highway is not paved to keep the Germans out (a tired World War II era joke), the truth is because of the permafrost there is no asphalt, creating a mud induced traffic jam every time the summer rains swing Yakutsk's way. Near thousand car traffic jams are not unheard of and during these back ups and travelers might pass the time while stuck in Siberian traffic by looting, beating, and kidnapping other travelers. Siberian mud pirates. 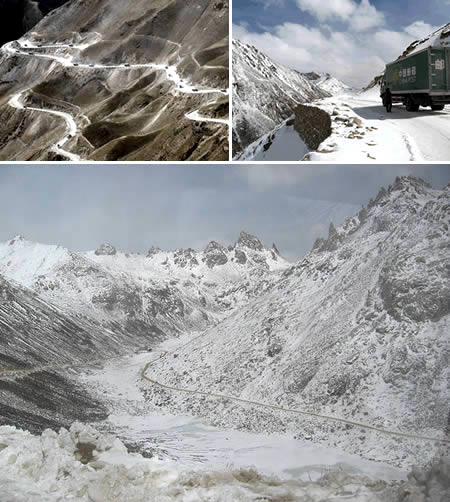 In China, the number of deaths caused by car accidents has nearly doubled in the past 20 years, climbing from 3.9 to 7.6 per 100,000 of the population between 1985 and 2005. The Sichuan-Tibet Highway, a high-elevation road between Chengdu and Tibet where landslides and rock avalanches are common, is undoubtedly part of the problem.

The 2,412km long Sichuan-Tibet Highway starts from Chengdu of Sichuan on the east and ends at Lhasa of Tibet on the west. The road stretches into Lhasa passing Ya’an, Garze and Chamdo. Sichuan-Tibet highway traverses 14 high mountains which average 4,000-5000m, spans dozens of famous rivers (Dadu River, Jinsha River, Lantsang River, Nujiang), crosses primeval forest and numerous dangerous sections. It has spectacular views along the line, with unique ethnic customs.

The James Dalton Highway is a 414-mile gravel road. It heads straight north from the Livengood turnoff of the Elliott Highway, through arctic tundra to the farthest north reaches of Alaska. Alyeska built the 360-mile haul road, now known as the Dalton Highway, from the Yukon River to Prudhoe Bay, for $150 million to supply the oil facilities on the North Slope. The pipeline bridge across the 1,875 mile Yukon River is the only span across that river in Alaska.

But this is not a road for the faint of heart, or those with a brand-new vehicle! It is still the main supply route for the Prudhoe Bay oilfields, and you will be sharing the road with large tractor-trailers. Windshields and headlights are easy targets of flying rocks. Most rental companies will not allow you to drive their cars on the Dalton. Trucks speeding along the slippery gravel track kick up thick clouds of dust or mud, reducing visibility to absolute zero; potholes take a heavy toll on cars and services, gas, and repairs are practically nonexistent. Don't even consider driving the Dalton unless you have 4-wheel drive, a CB radio, extra fuel, food, tires, and a trunk filled with supplies.

This is a narrow busy dirt track that stretches from Patiopoulo to Perdikaki in Greece. This road is a steep climb or decent, it is dangerous because it has huge pot holes and very little grip for the vehicles that travel on it. It is a narrow road with a sheer drop on either side of its slope with no guard rails or an prevention to stop a vehicle from going over. Many people die on his road every year, it is used by pedestrians, livestock and trucks, buses and cars. A very dangerous road that has gravel for grip in most places and there are no lines to determine where the edge is, this is especially dangerous at night, most of the accidents happen at night on this road. 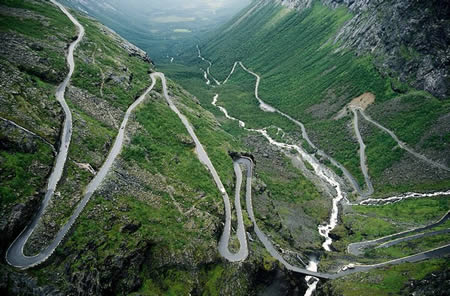 Trollstigen (The Troll Ladder) is a mountain road in Rauma, Norway, part of Norwegian National Road 63 connecting Åndalsnes in Rauma and Valldal in Norddal. A popular tourist attraction due to its steep incline of 9% and eleven hairpin bends up a steep mountain side, the road up is narrow with many sharp bends, and although it has been widened in recent years, vehicles over 12.4 meters long are prohibited from driving the road. At the top there is large parking place which allows visitors to leave their cars and walk for about ten minutes to a viewing balcony which overlooks the road with its bends and the Stigfossen waterfall. Stigfossen is a beautiful waterfall which falls 320 meters down the mountain side.

The A682 between junction 13 of the M65 and Long Preston is the worst road in England as it has claimed almost 100 fatalities over the last ten years. The 14 mile single lane A682 between junction 13 of the M65 near Nelson, Lancs, and Long Preston in North Yorkshire, had 22 serious accidents in the past three years - two of them fatal. Experts say it has an average of 0.5 deaths per 10 miles annually. It is a favorite for motorcyclists, especially early on a Sunday morning.

The highest paved mountain pass in the Eastern Alps --and the second highest in the Alps, after the Col de l'Iseran (2770 m)--, the Stelvio Pass Road connects the Valtellina with the upper Adige valley and Merano. It is located in the Italian Alps, near Bormio and Sulden, 75 km from Bolzano, close to Swiss border.

While it might not be as risky as other deadly routes, it's certainly breathtaking. The tour books advise that the toughest and most spectacular climbing is from the Prato side, Bormio side approach is more tame. With 48 hairpins, this road is regarded as one of the finest continuous hairpin routes in the Alps.

Those are 10 most dangerous roads of the world based on oddee. Do you have any other dangerous road that you think deserve to be in list? just let us know!
(Photo by Emiliano De Angeli and mcs)