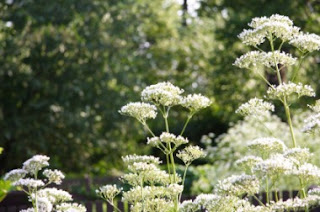 Dong quai, also called Chinese angelica, is a member of the celery family native to cold, mountainous regions of central China. It has been used in Chinese, Korean, and Japanese traditional medicine—as well as in cooking—for millennia. According to legend, dong quai made its medicinal debut as a result of a man’s desire to prove himself. He sets out for the mountains, where he hopes his ability to survive in the wild will attest to his strength and resourcefulness. Before he leaves, the man tells his devoted wife that if he has not returned after three years, she should consider him dead and take another husband. And that is precisely what happens. Shortly after the wife remarries, however, the man returns. Heartbroken, she falls deathly ill. During his mountain pilgrimage, the man collected the root from a plant he’d never seen before. He prepares it as a medicine and gives it to his wife, and she is fully restored to health. The name dong quai is often translated as “return to order,” because the herb is thought to help restore normal, healthy function to various body systems and to the body as a whole. Dong quai is one of the most widely prescribed herbs in Chinese medicine and is used—typically in combination with other herbs—primarily to treat health problems in women. For this reason, it is sometimes referred to as female ginseng.

Women’s tonic
Premenstrual syndrome
Menstrual cramps
Kidney tonic
Dong quai root is still one of the most popular herbs used in traditional Chinese medicine. It is well known for treating women’s health problems, such as painful menstruation and postpartum fatigue and weakness. It gained popularity in the West in the late 1800s when Merck introduced Eumenol, an extract of dong quai, to Europe to treat gynecological complaints.

Studies suggest that dong quai may have weak estrogenic activity, and it is often recommended for symptom relief in menopause. In a randomized, double-blind, placebo-controlled clinical trial of 71 postmenopausal women, however, dong quai was no better than placebo at reducing hot flashes. This study was widely criticized for using dong quai by itself instead of in combination with other herbs, which is how it is used in traditional Chinese medicine. When an herbal mixture containing Angelica sinensis root, Paeonia lactiflora root, Ligusticum rhizome, Atractylodes rhizome, Alisma orientalis rhizome, and Wolfiporia cocos was used in a study of menopausal women, it reportedly reduced hot flashes by 70 percent. Herbal combinations are the rule rather than the exception in many traditional systems of medicine, and clinical trials using just one herb may erroneously lead us to judge an herb as ineffective.
Dong quai has been used in combination with astragalus (A. membranaceus) to tone and strengthen the kidneys, as well as to enhance the immune system. In one study, this combination significantly reduced the deterioration of renal function and damage in animals with chronic kidney damage.
Dong quai and other Angelica species are known to contain psoralen, which is sometimes used in combination with ultraviolet therapy as a treatment for psoriasis. Studies have shown that this approach improves psoriasis in 40 to 66 percent of patients.

Those with bleeding disorders or taking anticoagulants should not use dong quai, as it may increase risk of bleeding. Use should be avoided during pregnancy. The psoralen in dong quai could, in theory, cause photosensitivity.
Posted by Tukang Warta
Share to: