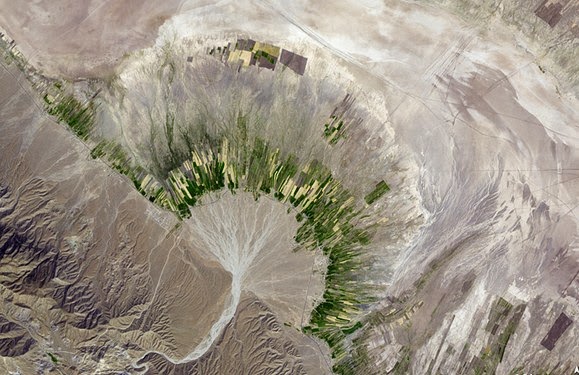 articlemostwanted - THE U.S. COMMITTEE on Alluvial Fan Flooding recently defined an alluvial fan as “a sedimentary deposit located at a topographic break, such as the base of a mountain, escarpment, or valley side that is composed of stream flow and/or debris flow sediments and that has the shape of a fan either fully or partially extended.”

The fanned or delta shape of alluvial deposits from mountains is formed over many thousands of years by downward-flowing waters or mud leaving the confines of their channel and spreading out into a wider area. The increase in the width of flow causes a decrease in the depth and velocity of the rushing water, which al-lows the deposition of sediment. This sediment consists of sand, debris, clay, and gravel carried by the stream or river from higher elevations, which can spread over hundreds of miles or kilometers.

Erosion also plays a part in alluvial fan formation, as newer flows carry away or redistribute material de-posited earlier. Fans that sit inactive through climate changes and tectonic activity over many centuries are also subject to weathering and wind erosion. Alluvial fans are built unevenly; varying amounts and size of debris, volume of water, and placement of previous de-posits influence where the alluvium is left. Usually, the larger rocks are closest to the topographic break, while finer grains travel further before being deposited. Some areas of the fan build up more sediment than others over years. Overall, the slope of a fan is commonly under 10 degrees. A flash flood leaves a different pat-tern of deposits than a shallower and less violent stream of water. Alluvial fans can consist of evenly dropped sand or be riddled with channels and trenches of varying depths. The former is considered more dangerous, because the lack of paths for water makes predicting the pattern of future floods impossible.

Alluvial fans are most often found at the base of hills and mountains in arid or desert environments or piedmont plains all over the world. They are very common in western North America; in PAKISTAN, IRAN, and other parts of the MIDDLE EAST; Europe, especially in SPAIN and ITALY; and the Andean areas of CHILE and AR-GENTINA. They form where highlands border lowlands, and where the lowland basin area is smaller than the highland area. Often in mountainous terrain, two or more alluvial fans merge or cross each other. This forms a feature called a bajada or bahada, which ex-tends into a flood plain. Like an alluvial fan, bajadas tend to be built of larger rocks and sediment near the mountains and channels that guide water to them, while finer silts mark their edges.

In the UNITED STATES, the Federal Emergency Management Agency (FEMA) can designate certain areas as natural hazards. After several catastrophic floods in the late 1970s, FEMA began to evaluate the risks of flooding to alluvial fans. Some fans that were still subject to flooding presented attractive, gentle slopes for commercial or residential development. FEMA now decides whether such sites are hazardous based upon how susceptible they are to alluvial flooding and flood occurrence over a 100-year cycle, and how predictable the course of the floods will be.