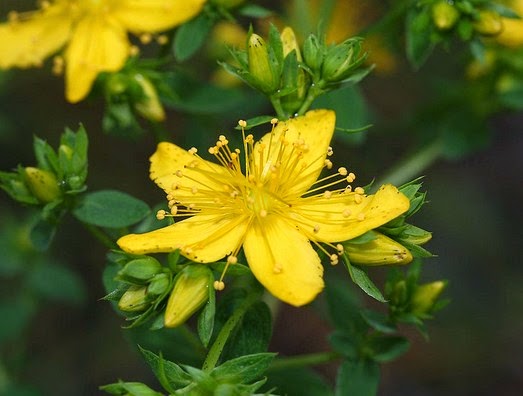 articlemostwanted - The sunny yellow flowers of St. John’s wort harbor a strange secret. Bruise the delicate petals and they seem to bleed. The blood-red liquid is an oil released from tiny, dark-colored glands scattered along the petal margins. In ancient times, a plant that “bled” was assumed to possess great powers. During the rise of Christianity, the herb came to be associated with John the Baptist (wort is the Old English word for “plant”). It was said to bloom on the saint’s birthday, June 24, and to bleed on August 29, the anniversary of his beheading. The earliest use of the name may date to the 6th century, when the Irish missionary St. Columba carried the herb with him into northern Scotland. The genus name, Hypericum, is from the Greek and means “over a picture or icon”—a reference to the custom of draping the herb over religious images to strengthen their powers in banishing demons. For many centuries, St. John’s wort was a symbol of protection against evil but also a prized medicinal herb, with the power to heal the body and to ease the troubled mind.

Minor depression
Muscle aches
Fever blisters
Modern scientists are confirming what the ancients knew. In 2009, researchers evaluated 29 clinical trials conducted on St. John’s wort for mild to moderate depression and concluded that it is more effective than a placebo, as effective as standard prescription antidepressants, and associated with fewer adverse effects than prescription medications. St. John’s wort has gained global recognition as an effective treatment for minor depression, with 2007 worldwide sales exceeding $100 million.
Antidepressant medications are also used to treat severe forms of premenstrual syndrome. A pilot trial using St. John’s wort for PMS at the University of Exeter in England reported that a majority of women experienced a 50 percent reduction in symptoms, including anxiety and depression.
St. John’s wort oil is highly regarded as a topical agent. When the flowering tops are infused in oil—olive oil is best—the oil turns ruby red after sitting in the sun for several weeks. It is massaged into the skin to relieve pain or made into an ointment for wounds, burns, and insect bites. Basic science and animal studies have confirmed that the oil eases inflammation of the skin and fights bacteria.
St. John’s wort is being investigated for use in viral infections. Hypericin, one of its active constituents, has been shown to be highly active against the human immunodeficiency virus (HIV) and herpes simplex 1—the virus known to cause cold sores and fever blisters.

Tea: Pour 1 cup boiling water over 1 teaspoon herb. Steep 5 to 10 minutes. Strain. Drink 1 to 3 times per day.
Tincture: Use 2 to 3 droppersful in 1 cup hot water or lemon balm tea.
Capsules/Tablets: Most research has been done on products guaranteed to contain specific levels of key ingredients. To find a supplement, look for one standardized to 0.3 percent hypericin or 3 to 5 percent hyperforin. The dose for these products is 900 to 1,500 mg per day.

St. John’s wort appears to be safe. The main risk is the potential for interaction with prescription medications. Safety during pregnancy has not been established.
Posted by Tukang Warta
Share to: