This Rooster was Dragged To Court Because of the Crowing Sounds 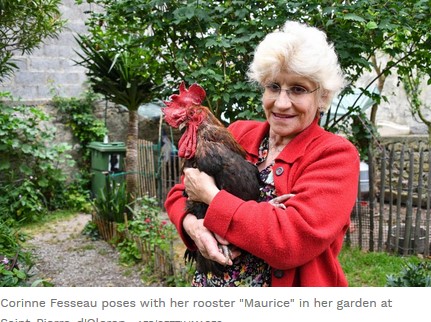 amw - This is the weirdest trial case in France. Commonly only human that dragged to the court, but not now. The figure charged in the trial this time was an animal.

This trial case is the result of reports from a married couple Jean-Louis Biron and Joelle Andrieux.

This story reported by today.line.me. Once upon a time there was elderly couple who had previously built a vacation home in the village of Saint-Pierre-d'Oleron 15 years ago, preparing their homes to enjoy their retirement. And when the time has come, they started to occupy the house to seek peace.

But alas, their hopes were cast aside by a rooster named Maurice.

The rooster became the intruder of the couple's life, because its crowing was so loud. That made the couple finally reported Maurice.

Corrine Fesseau, as the owner of Maurice, was certainly outraged by the report.

According to her, it is impossible for humans to ask that roosters do not crow in the morning, which has become its trademark.

On the otherhand, she argues that with the sound of crowing chickens, humans are even more helped to wake up in the morning.

After months of trials, the judge decided Maurice had a right to crow in his natural habitat. Reuters reported that one of his owners, Corinne Fesseau, declared the win as a victory for the rural way of life.

The case has garnered support around the world with the New York Times reporting how the judge declared that the rooster, “was just being himself.” He also awarded Maurice €1,000 in damages (approximately $1,100). Maurice has received fan mail from far and wide.

The lawyer who argued on behalf of Maurice and his owners, made the point that the result was in accordance with French law, where neighbourhood fights are only won when the nuisance is excessive or permanent.