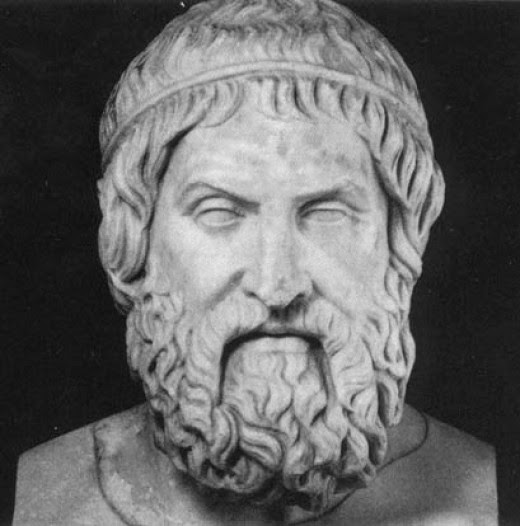 (b. 525/524 BCE—d. 456/455 BCE, Gela, Sicily)
articlemostwanted - Aeschylus, the first of classical Athens’s great dramatists, raised the emerging art of tragedy to great heights of poetry and theatrical power. He grew up in the turbulent period when the Athenian democracy, having thrown off its tyranny (the absolute rule of one man), had to prove itself against both self-seeking politicians at home and invaders from abroad. Aeschylus himself took part in his city’s first struggles against the invading Persians. Later Greek chroniclers believed that Aeschylus was 35 years old in 490 BCE  when he participated in the Battle of Marathon, in which the Athenians first repelled the Persians. If this is true, it would place his birth in 525  BCE . Aeschylus’s father’s name was Euphorion, and the family probably lived at Eleusis (west of Athens).

Aeschylus was a notable participant in Athens’s major dramatic competition, the  Great Dionysia , which was a part of the festival of Dionysus. He is recorded as having participated in this competition, probably for the first time, in 499 BCE . He won his first victory in the theater in the spring of 484 BCE . In the mean-time, he had fought and possibly been wounded at  Marathon , and Aeschylus singled out his participation in this battle years later for mention on the verse epitaph he wrote for himself. His brother was killed in this battle. In 480 BCE the Persians again invaded Greece, and once again Aeschylus saw service, fighting at the battles

of Artemisium and Salamis. His responses to the Persian invasion found expression in his play Persians, the earliest of his works to survive. This play was produced in the competition of the spring of 472 BCE and won first prize.

Around this time Aeschylus is said to have visited Sicily to present Persians again at the tyrant Hieron I’s court in Syracuse. Aeschylus’s later career is a record of sustained dramatic success, though he is said to have suffered one memorable defeat, at the hands of the novice Sophocles, whose entry at the Dionysian festival of 468 BCE was victorious over the older poet’s entry. Aeschylus recouped the loss with victory in the next year, 467, with his Oedipus trilogy (of which the third play, Seven Against Thebes, survives). After producing the masterpiece among his extant works, the Oresteia trilogy, in 458, Aeschylus went to Sicily again.

Aeschylus wrote approximately 90 plays, including satyr plays as well as tragedies; of these, about 80 titles are known. Only seven tragedies have survived entire. One account, perhaps based on the official lists, assigns Aeschylus 13 first prizes, or victories. This would mean that well over half of his plays won, since sets of four plays rather than separate ones were judged. According to the philosopher Flavius Philostratus, Aeschylus was known as the “Father of Tragedy.”

Aeschylus’s influence on the development of tragedy was fundamental. Previous to him, Greek drama was lim-ited to one actor and a chorus engaged in a largely static recitation. (The chorus was a group of actors who responded to and commented on the main action of a play with song, dance, and recitation.) The actor could assume different roles by changing masks and costumes, but he was limited to engaging in dialogue only with the chorus. By adding a second actor with whom the first could converse, Aeschylus vastly increased the drama’s possibilities for dialogue and dramatic tension and allowed more variety and freedom in plot construction. Although the dominance of the chorus in early tragedy is ultimately only hypothesis, it is probably true that, as Aristotle says in his Poetics, Aeschylus “reduced the chorus’ role and made the plot the leading actor.”

Aeschylus was an innovator in other ways as well. He made good use of stage settings and stage machinery, and some of his works were noted for their spectacular scenic effects. He also designed costumes, trained his choruses in their songs and dances, and probably acted in most of his own plays, this being the usual practice among Greek dramatists. But his formal innovations account for only part of his achievement. His plays are of lasting literary value in their majestic and compelling lyrical language, in the intricate architecture of their plots, and in the universal themes which they explore so honestly. Aeschylus’s language in both dialogue and choral lyric is marked by force, majesty, and emotional intensity. He makes bold use of compound epithets, metaphors, and figurative turns of speech, but this rich language is firmly harnessed to the dramatic action rather than used as mere decoration.

Aeschylus is almost unequaled in writing tragedy that, for all its power of depicting evil and the fear and consequences of evil, ends, as in the Oresteia, in joy and reconciliation. Living at a time when the Greek people still truly felt themselves surrounded by the gods, Aeschylus nevertheless had a capacity for detached and general thought, which enabled him to treat the fundamental problem of evil with singular honesty and success.

The chronographers recorded Aeschylus’s death at Gela (on Sicily’s south coast) in 456/455, at age 69. A ludicrous story that he was killed when an eagle dropped a tortoise on his bald pate was presumably fabricated by a later comic writer. At Gela he was accorded a public funeral, with sacrifices and dramatic performances held at his grave, which subsequently became a place of pilgrimage for writers.