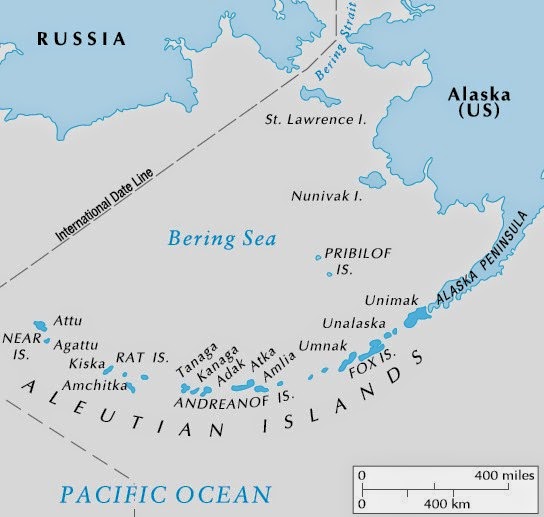 articlemostwanted - KNOWN AS THE Catherine Archipelago until 1900, the Aleutian Islands comprise some 150 islands in four groups, which are, in order of proximity to the main-land: the Fox, Andreanof, Rat, and Near Islands. The name probably derives from the Chukchi word aliat, meaning “island.”

Geographically, the islands  separate the Bering Sea from the PACIFIC OCEAN. They extend in an arc about 1,600 mi (2,560 km) into the Bering Sea off the west coast of ALASKA, to which they belong po-litically. Their total area is 6,821 square mi (17,666 square km) and the total population is approximately 12,050.

Geologically, the islands comprise limited sedimen-tary and metamorphic rocks but are mainly volcanic in origin and are located at the junction between the Pa-cific and North American tectonic plates. They are characterized by volcanic peaks representing a contin-uation of the Aleutian range of mainland Alaska. Some volcanic peaks remain active, including Makushin on Unalaska and Shishaldin on Unimak, which are the largest islands in the Fox group.

Climatically, the Aleutians are oceanic, with annual temperatures ranging on average from 30 degrees F (–1 degrees C) in January to 52 degrees F (11 degrees C ) in August. There is a 135-day growing season between May and September and annual rainfall is 80 in (2.03 m) with rain occurring all year with abundant fog. The natural vegetation is a mixture of Asian and American species comprising dwarf shrubs with grass-, sedge-, and herb-rich meadows in the lowlands and mosses, lichens, and alpine herbs in the uplands. Most of the is-lands are within the Aleutian Biosphere Reserve and Wildlife Refuge, which contains a unique mixture of marine birds and mammals.

The islands were colonized at least 8,000 years ago by hunter-gatherers migrating east from Asia when sea levels were considerably lower than today. The native people, the Ungangans, encountered by European ex-plorers in the 1700s were named Aleuts. In 1741, the first European arrivals were Vitus Bering, a Danish sea-farer in Russian employ, and Alexei Chirikov; they captained separate ships and each discovered different islands. Bering was shipwrecked and died on what is now called Bering Island in the adjacent Russian-owned Komandorski Islands.

Thereafter, Siberian fur trappers established bases as Russia extended its influence in North America, leading to the exploitation of the Aleuts for labor and the large seal and otter populations for furs. That ended with the transfer of Alaska to the United States in 1867. Further development came with the discovery of gold in Nome in 1900 and the establishment of Dutch Harbor, Unalaska, as a shipping port.

During World War II, the Aleutian Islands featured in hostilities between the United States and Japan. A naval base was constructed at Dutch Harbor in 1942, and following its bombing, the Japanese occupied sev-eral islands but were routed in 1943 by U.S. forces from bases on other islands. Underground nuclear tests were carried out on Amchitka (Rat group) in the 1960s and early warning radar systems, pointing toward So-viet Russia, were constructed during the height of the Cold War.

Today, sheep and reindeer herding are part of the economy, with some production of market garden commodities. Hunter-gatherer traditions involving hunting and fishing equipment, including basketry, are maintained by modern-day Aleuts. Fishing and hunting of seal are overseen by the federal government and only Aleuts are allowed to undertake such activities.