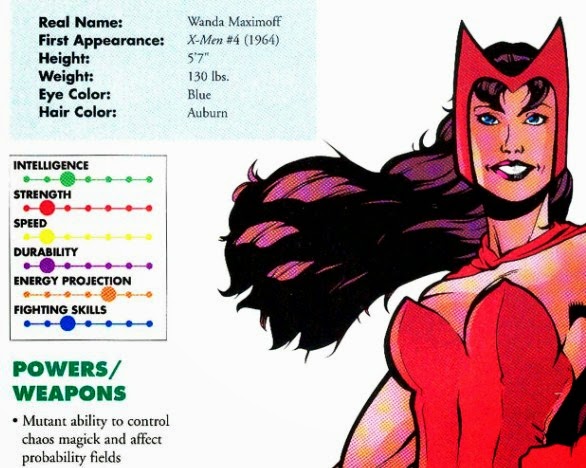 articlemostwanted - Wanda Maximoff and her twin brother Pietro, the children of Magneto, were horn without their father’s knowledge in the mountains of Eastern Europe. Abandoned by their mother, they were adopted by a gypsy couple. Born the night of a supernatural storm, Wanda was imbued from infancy with mystical potential, which would affect her latent mutant abilities and allow her to channel chaos magic in a number of useful ways. Chief among these are her probability—altering hex—spheres—finite pockets of reality—disrupting, psionic force that cause random disturbances in the molecular-level probability fields surrounding their targets. As a result, unlikely phenomena occur. With time to prepare, ‘Wanda can cast her hex power to garner specific results.

As Wanda and Pietro reached adolescence, they both manifested their mutant powers, and soon were forced to flee their adopted family. During their early teens, the twins wandered Central Europe. They were often the targets of persecution, with the superhumanly lust, self-assured Pietro defending his quieter, meeker sister.

During one such encounter, a mob of superstitious villagers would have killed Wanda and Pietro were it not for the intervention of Magneto. Unaware he was their natural father, they joined his Brotherhood of Evil Mutants as the Scarlet Witch and Quicksilver. They knew their terrorist actions were immoral, but served out of a sense of obligation—and because they feared Magneto’s wrath.

After the Brotherhood’s dissolution, Wanda and Pietro sought redemption for their transgressions. They petitioned for membership in the Avengers and were inducted to replace a pair of departing founders. With the Avengers. Winda slowly emerged from her shell. She became close friends with many of the teams’ members, forging strong bonds that endure to this day. Whereas Magneto viewed Wanda merely as a means to an end, the Avengers valued her for her abilities.

Seeking the stability that life had denied her thus far, Wanda fell in love with and married the Avenger’s “perfect man”—the synthetic humanoid known as the Vision. Fate intervened, however, and their marriage crumbled when the U.S. government dismantled the android, viewing him as a threat to world security. To carry on, Wanda was forced to find her own inner strength.

Reserved, emotional and intense, Wanda has matured among the Avengers—attaining a greater degree of control over her unpredictable abilities, and often taking on a leadership role. But given her history, she can still feel like an outsider on occasion. The Avengers are her family, providing the only teal security and stability Wanda has ever known. Taken in despite her troubled past, she will always be grateful for their trust and unconditional friendship. No longer haunted by the sins of her youth or the failings of her father. Wanda is free to face the future as her own woman.