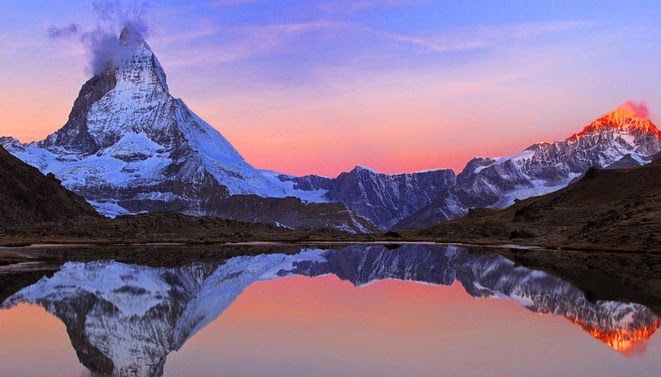 articlemostwanted - THE ALPS ARE Europe’s major mountain chain, occupying center stage between the cultural and geographic regions of western, eastern, southern, and northern Europe. Stretching in an arc about 600 mi (1,000 km) from west to east, the range covers parts of FRANCE, ITALY, SWITZERLAND, LIECHTENSTEIN, AUSTRIA, and SLOVENIA, with related features extending into GER¬MANY, CROATIA, and BOSNIA. Geologically, the mountains are at the core of even wider-reaching mountain systems, such as the Apennines and the Carpathians, and several lower chains on the outskirts (considered pre-Alps) such as the Jura in France, the Schwdbische Alb in Germany, or the Wienerwald in Austria all were formed as a result of the collision of Italy and the Mediterranean floor with the landmass of Europe 150 million years ago. Several million people live within sight of the Alps, including residents of such major cities as Turin, Vienna, and Grenoble. The mountains sometimes referred to as the “backbone” of Europe—have played a significant role in the history of Europe. Presently, the Alps are among the leading tourism locales in Europe, with about 100 million visitors per year, leading to challenges in growth such as overdevelopment and air pollution.

The origin of the name Alps is uncertain; it is most likely Celtic, perhaps for “white” or “high.” For many centuries the range was seen as a barrier between Mediterranean civilization and northern Europe, marked by heroic crossings like that of Hannibal with his elephants in 218 B.C.E. Mountain cultures in Switzerland, the Tirol, and southeastern France typically represented independence from authority and dogged defense of traditional freedoms, from William Tell to the perpetually neutral Swiss state of today. Gradually, the mountains were explored and valleys were settled. From the development of climbing as a sport in the 19th century and the engineering marvels of lengthy tunnels of the 20th century, the Alps ceased to be a threatening impasse, a land of avalanches and evil spirits, and became a recreation spot instead, a place of beauty. Notable sporting centers include Winter Olympic sites at Grenoble, Chamonix, Albertville, Garmisch, Innsbruck, and Cortina and ski complexes as Zermatt, Saint Moritz, and Bad Gastein.

There are numerous peaks over 12,000 ft (3,500 m), more than 1,200 glaciers, high carved-out circular basins called cirques, and sharp crags known as aiguilles. Long, narrow valleys separate high peaks, creating dramatic views, often accentuated by large, elongated lakes. These lakes are relics of the last Ice Age when glaciers dug deep trenches between the ranges: Lakes Maggiore and Como in Italy, Lakes Geneva, Neuchdtel and Constance in Switzerland, and the series of interconnected lakes in central Switzerland are all generally long and very deep rather than wide. Other valleys were cut by swift mountain streams that form some of Europe’s major rivers: the RHUNE, the RHINE, the Po, and several major tributaries of the DANUBE, the Inn, the Mur, the Drava, and the Sava. These rivers carry water from the Alps as far away as the MEDITERRANEAN, North, and BLACK seas.

The Alps are traditionally divided into three sections, Western, Central, and Eastern, with numerous subdivisions within these. The border between France and Italy is delineated by the Maritime Alps, with peaks that emerge almost directly from the Mediterranean Sea, followed by the Cottian, Graian and Dauphind (or Delphinic) Alps, and the Mont Blanc complex. Gran Paradiso, in the Graians, is the tallest peak entirely within Italy (13,648 ft or 4,061 m). Directly to the north is the double summit of Mont Blanc(15,771 ft or 4,806 m), the highest mountain in Europe outside of the Caucasus. The Mont Blanc massif is composed of several peaks and includes one of the longest vertical slopes in Europe (over 11,550 ft or 3,500    m), and the largest glacier in France, the Mer de Glace (“sea of ice”) on the Col du Gdant. A 7-mi (11-km) tunnel directly beneath the mountain connects ski resorts in France and Italy.

After traveling mostly northward from the Mediterranean, the Alpine chain turns a corner at the Mont Blanc group. Heading eastward, the mountains of the Central Alps form some of the highest and most famous portions of the Alps. Directly east of Mont Blanc, separating it from the Pennine Alps, is the Great Saint Bernard Pass, one of the highest passes in Europe and the site of a monastic hospice for travelers for nearly 2,000 years. The Pennines, forming the border of Switzerland and Italy, together with the parallel range of the Bernese Oberland to the north, form the quintessential Alps of postcard quality. Mountains such as the Matterhorn and the Jungfrau are immediately evocative of the Alps and Switzerland. The Pennine Alps contain 10 of the 12 highest peaks in the Alps. The Aletsch glacier is the largest in Europe, 16 mi (26 km) long, covering 50 square mi (130 square km). The Central Alps also include the mountains of southeastern Switzerland, the Lepontine, Bernina, Glarner, and Rhaetian Alps.

The Eastern Alps begin roughly at the watershed between the Rhine and Danube river basins. These chains tend to be less orderly in their organization, but continue to be more or less aligned in an east-west direction. The Austrian Alps include the Bavarian range on the border with Germany (including Germany’s highest peak, the Zugspitze, at 9,718 ft or 2,963 m, the Gtztal and Ortler ranges on the border with Italy, and the Hbhe Tauern, with Austria’s highest mountain, the Grossglockner (12,461 ft or 3,797 m). To the south, the Italian Dolomites have a slightly different character, with more rocks and less snow. Along Austria’s southern frontier with Italy and Slovenia run the Carnic Alps, the easternmost part of the Alps proper. The Julian Alps are an offshoot to the south across Slovenia, with links to the lengthy mountain chain that runs down the length of the Adriatic coast, the Dinaric Alps.