ACONCAGUA MOUNTAIN LIES west of Mendoza,argentina, entirely within Argentina, and immediately east of Argentina’s border with Chile. The mountain is, at 22,834 ft (6,960 m), not only the tallest mountain in the Western Hemisphere, but also the highest outside of Asia. Its twin peaks, the northern of which is the tallest, can be seen from the coast of Chile 100 mi (162 km) away.

There are different interpretations of the origin of the name Aconcagua. It may be derived from the native Quechua akun (“summit”), ka (“other”), and agua (“admired” or “feared”). Thus, it is translated from Quechua as a summit that is feared or admired. Another version is that the name is derived from Arauca roots. Thus, Aconca-Hue is a Mapuche name for the corresponding Aconcagua River that, from Chile, “comes from the other side.”

The relatively new mountain was created by subduction of the Nazca plate beneath the South American plate. Geology of the Aconcagua area can be grouped in three basic time periods: a base that developed before the Jurassic period, Mesozoic sequences, and coverings from the Cenozoic period. Glaciers on Aconcagua include Lower Horcones Glacier, the Upper Horcones Glacier, the Los Polacos (or Los Relinchos) Glacier (a climbing route), and the Güssfeldt Glacier. Glaciers on Mount Aconcagua are, owing to more arid conditions, less pronounced than those to the south in Patagonia. 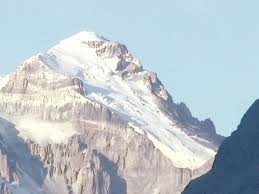 Most of the vegetation and wildlife, because of the aridity and the short growing season at high elevations, are concentrated below 13,123 ft (4,000 m). Typical vegetation is low-growing brush (steppe) adapted to low temperatures, thin soils, and high winds. Brush species include lena amarilla, vareta, and cuerno de cabra, with grass species including huecu and coirones. Wildlife such as the condor, mora eagle, puma, and red fox migrate to lower elevations during winter. Mountain mice hibernate on site. Streams harbor chorlos, churrines, and torrent ducks. Guanacos (similar to llamas) can gather in large groups. Hares introduced from Europe are plentiful. Aconcagua Mountain is a provincial park. It was included in 1983 as part of a network of 10 protected areas of the province of Mendoza. It is designated as a Protected Wilderness Area, based on its scenic, recreational, cultural, genetic, and biodiversity values. These areas serve as a reference in relation to similar yet degraded habitats. 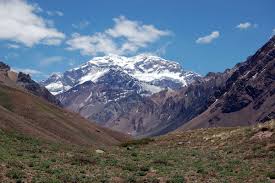 General Don José de San Martín crossed General Don José de San Martín crossed the Andes near Aconcagua Mountain to liberate the Chilean area from the Spanish in 1817. His army of more than 5,300 men, 9,280 mules, and 1,600 horses crossed at more than 13,123 ft (4,000 m) in lavation. In 1835, Charles Darwin was one of the first European scientists to collect data about the mountain. In January 1985, a remarkable discovery was made by Argentine climbers an Inca cemetery at 17,388 ft (5,300 m) in elevation. The site included circular stone walls, a mummy, and six statues—three human and three llama figures.