Ahaggar Mountains - Montains in the Desert 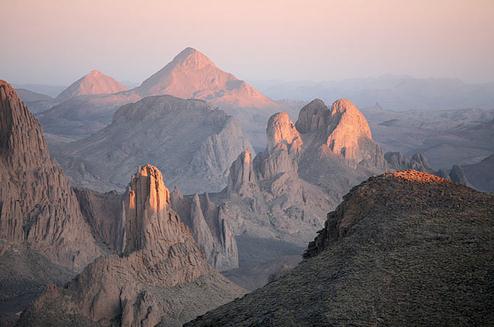 THE AHAGGAR IS a large mountainous plateau region lying on the TROPIC OF CANCER in the north-central SAHARA DESERT. It covers an area of 210,000 square mi(543,900 square km) which is about the size of FRANCE, or of ARIZONA and NEW MEXICO combined. It is about 1,000 mi (1,609 km) east of the ATLANTIC OCEAN, 1,000 mi north of the BIGHT OF BENIN, and 1,000 mi south of the MEDITERRANEAN SEA.

Most of the Ahaggar lies in southeast ALGERIA about 900 mi (1,450 km) south of Algiers. However, small areas extend into NIGER in the south and LIBYA in the northeast. The Ahaggar is a part of the Mid-Sahara Rise, which stretches 1,300 mi (2,092 km) east to west and 965 mi (1,553 km) south to north. The Mid-Sahara Rise includes the Adrar des Iforhas Mountains in MALI and the Massif de l’Air Mountains in Niger.

The Sahara lies on the African shield, a thick pre-Cambrian crystalline base. Geological studies have concluded that about 300 million years ago violent earthquakes of enormous proportions pushed up this central massif or plateau region of the Sahara. This was followed by volcanic eruptions that poured enormous beds of basaltic lava over the area.

The geologic activity underlying the Ahaggar plateau pushed its granite base up thousands of feet above the Sahara. The Ahaggar plateau’s height is above 3,000 ft (915 m). The geologic activity produced enormous cliffs and fissures. These were broken into strange formations. At the heart of the Ahaggar, volcanic eruptions produced pumice and lava beds in many areas, some of which are basaltic. There are also “organ pipes” or volcanic needles or spires of rock that may reach 1,000 ft (305 m) high.

The Ahaggar Mountain chain, which is also called the Hoggar Mountains, is situated on top of the Ahaggar plateau. The plateau is like a platform covered with lava fields. The Tuaregs call the platform the Atakor, while the Arabs call it the Kudia. The Atakor platform averages 6,600 ft (2,012 m). At the heart of the Ahaggar chain is the Atakor range, which has extinct volcanoes in many places that rise to about 9,000 ft (2,743 m). They rise from the plateau and are the highest portion of the plateau. At the center of the Ahaggar Mountains is the highest peak, Mount Tahat (9,573 feet or 2,918 m). Other peaks include Mount Atakor and Mount Assekrem, which is where the Berber Tuaregs locate the “end of the world.”

While most of the Ahaggar is waterless and totally bare of vegetation, there are occasional snows. In some places in deep ravines, there are verdant strips that can be seen on aerial photographs. There are two waterfalls in the Ahaggar. One is at Tamekrest and the other is at Imeleoulaouene. A variety of animals live in the mountains along with the nomads, mostly Tuaregs, who frequent the oases located in these rugged reaches.