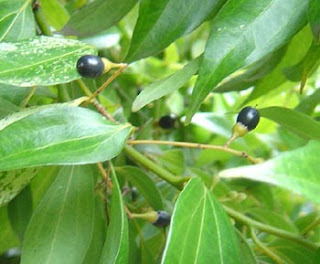 The warm, sweet fragrance of cinnamon is unmistakable, evoking visions of hot cinnamon rolls and mulled cider. True cinnamon (Cinnamomum verum) is native to the island of Sri Lanka. Cassia, or Chinese cinnamon (C. cassia), is a close relative cultivated in Vietnam, China, and Indonesia. Both varieties come from the fragrant inner bark of a tree belonging to the laurel family. Cinnamon was a precious commodity that was traded extensively throughout the ancient world. The Egyptians prized it as an essential ingredient in embalming mixtures used to perfume and preserve the dead. Moses of the Old Testament added it to a holy oil for anointing. In Rome during the first century A.D., cinnamon was at least 15 times more expensive than silver, and centuries later it was still costly. Only the very wealthy in medieval Europe could afford this expensive spice, for which demand was high and supply low. A desire to monopolize the cinnamon trade prompted European expansion into Asia in the 16th and 17th centuries. Eventually, cinnamon became more widely available and affordable.

Diabetes
Cinnamon may be especially important to people with diabetes. Mainly the bark is used medicinally. A polyphenol compound—with the tongue-twisting name methylhydroxychalcone—is found in cassia cinnamon. It is this compound that may be responsible for cinnamon’s main medical benefit: lowering blood sugar in people with diabetes. The compound seems to affect insulin receptors and aid in the formation of glycogen, or stored sugar. Cinnamon also has antibacterial effects (from the essential oil) and antioxidant effects (from the polyphenols), the latter probably helping with some of the complications of diabetes.
lemari asam harga .adv - Cassia cinnamon has been studied in clinical trials, primarily by looking at fasting blood sugar levels in people with diabetes. Although one study found improvements in fasting blood sugar (as much as 29 percent in some cases) and cholesterol levels in people with type 2 diabetes, other studies have found no effect. It may be that cinnamon works better in people whose diabetes is poorly controlled, but there may be other factors, such as genetics and medications, that explain why sometimes cinnamon helps and other times it doesn’t.

Powder: For diabetics, powdered cinnamon spice is an option—but for positive effects on blood sugar levels it is necessary to use approximately 1 teaspoon daily. The common spice purchased in grocery stores is not necessarily cassia cinnamon.
Capsule: Cinnamon capsules range in dose and suggested use; studies on type 1 and 2 diabetics used 1 to 6 g cinnamon a day, taken in divided doses.

Cinnamon is well tolerated, though the volatile oil can cause a skin rash. Cassia and other cinnamons contain small amounts of coumarin; blood-thinning and liver problems generally occur with this compound only if large amounts are taken over long periods. To be safe, caution is advised for anyone with liver problems. Due to its blood-thinning effects, people should stop taking cinnamon in quantities greater than use as a spice at least one week prior to surgery. Medicinal doses are not recommended during pregnancy. Close monitoring of blood sugar levels in diabetics is warranted to avoid unsafe lowering of blood sugar.
Posted by Tukang Warta
Share to: