What were the unique facts occur on the Events? .. 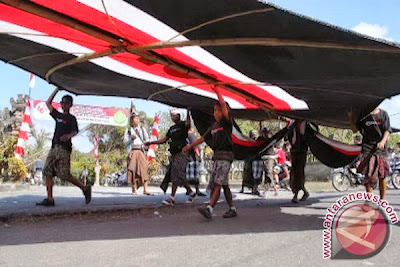 The security and safety assurance during the APEC Summit 2013 which held in Nusa Dua, Bali, on October 1 to 8 is done as much as possible, including a ban on playing kite
"Playing kite?". on Thursday Evening, Deputy Governor of Bali, Ketut Sudikerta, said "We inform to the citizens, especially for the sekaa (a group of kites’ lovers), not allowed to play kite during the event."

lemari asam .adv - The ban applied generally, not just in Nusa Dua or International Airport Ngurah Rai only. The reason is "Because securing the air by using helicopter is not only for Nusa Dua tourist area, but also to patrol throughout Bali."

Sudikerta said, the kite on the sky can be very distracting for pilots and flight supervisor while operating the vehicle.

Just for information, the traditional kites in Bali size are big, even the size can be as big as a size of  medium room! The requirements needed to fly a kite is about 1,000 meter or 3,000 feet.
The rope used to fly a kite is also quite large and strong, and not easily broken. To ensure that all citizens obey to the ban, Bali government will take action against anyone who violates. 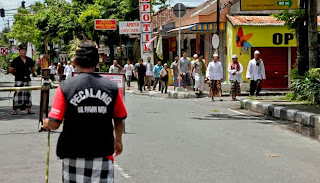 Besides involving a thousands of military and police officers, securing at the opening of APEC summit in Nusa Dua Bali, Monday (10/07/2013), also involved indigenous villagers that are called "pecalang" for securing during the APEC Summit.
They served at the "Ring Tiga", exactly in front of the entrance area of the Bali Tourism Development Corporation (BTDC) Nusa Dua.
By dressing in Balinese traditional clothes and keris as a weapon that equipped by pecalang, their appearance were different than other security officers. The sunglasses gave the impression of fierceness to the four  of “pecalang” Indigenous villages of Bualu while watching vehicles passed by.
"The task to secure during APEC Summit, we start from at date of 3rd until the date of 8th, we help to secure from unwanted things that will be happened anytime," said one of pecalang Indigenous villages of Bualu, Wayan Suwita.
From all this time, pecalang are always involved by the Bali Police in various grand event or flow back traffic each year. Pecalang routinely also anticipate illegal people to come in by doing inspections to the villager and boarding houses.

3. SBY Made A Surprise To The Russian President By Playing Guitar 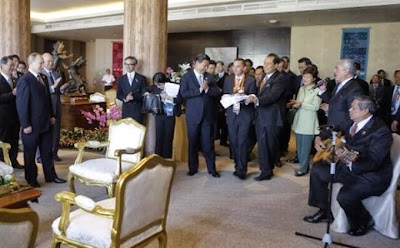 President Susilo Bambang Yudhoyono (SBY) made a surprise during the sidelines of a meeting with the leaders of the member countries of the Asia-Pacific Economic Cooperation or APEC.
While they had a lunch, the President suddenly picked up the guitar and then sing “Happy Birthday”  in the Main Waiting Room, Sofitel Hotel, Nusa Dua, Bali, on Monday (10/07/2013) afternoon.
Suddenly the leaders of APEC member countries were surprised. President gave a surprise purposely to Russian President, Vladmir Putin, on his 61st’s birthday.

4. Madam Ani Invites The Wives of APEC Leaders’ to Journey to the Heart of Bali 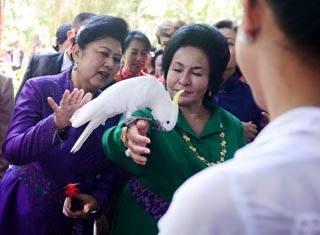 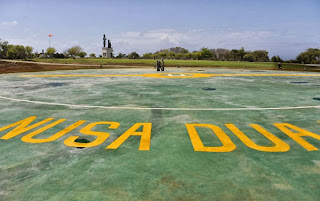 The organizer of APEC summit in Bali had completed the request of President Barack Obama, one of which is the construction of the helipad. Helipad which spend up to 2 billion had been completed, but Obama apparently canceled to come.
Previously, some time ago the Deputy Task Force Commander, VVIP Security of APEC summit, Lieutenant Colonel (Armed) Kadek Arya, said that, this helipad is one of the Obama's request. In addition to the helipad, they also asked for special parking for the Presidential plane, Air Force One.
The director of BTDC Nyoman Cakra admitted helipad for Obama is ready to operate. The helipad had been tested recently. This helipad is the largest helipad in Indonesia," said Chakra.
Chakra said that the helipad is 46 meters in diameter and had been done for two months. The cost in making this helipad had spend up to 2 Billion Rupiah.

The result of APEC summit produced 7 points agreement:
First, APEC leaders agreed to increase efforts to achieve the Bogor Goals by the year of 2020 to come.
Second, agreed to increase intra-APEC members’s trade or intra-regional trade.
Third, APEC leaders agreed to accelerate APEC's physical, institutional, and people-to-people connectivity.
Fourth, the leaders reaffirmed their commitment to achieving strong global economic growth, balanced, sustainable and inclusive.
Fifth, the leaders agreed to cooperate in improving regional food supply, energy supply and ensuring clean water needs.
Sixth, the agreement in ensure synergy of APEC members and complementary by  multilateral and other regional process such as the East Asia Summit and the G20.
Seventh, APEC leaders agreed to cooperate closely with the business sector through the Business Advisory Council (ABAC).