Captain Marvel - Protector of the Galaxy 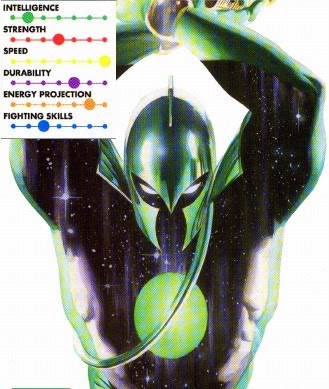 Linked by circumstance to human teenager Rick Jones through the atom- exchanging Nega-Bands, the exiled Kree warrior Mar-Veil forged a reputation as a legendary intergalactic protector. Rick would summon the original Captain Marvel in times of danger by banging the Nega-Bands together, thus trading places with the hero. But in the end Mar-Veil was stricken by the one enemy he could not defeat:  an incurable systemic cancer.

Rick slowly began to move on with his life, eventually marrying. Bu Mar-Veil’s lover, Elysius, felt more alone than ever. Using Titanian super-science, she sampled Mar-Veil’s genetic structure to conceive a child, Genis-Vell. To protect him from his father’s enemies, Genis was aged to maturity through artificial means, implanted with false memories of his upbringing and sequestered on an isolated world. Although it had all been done for his own good, Genis-Vell emerged from a technological womb aged 18 years without the experience to hear the weight of his family’s heroic responsibilities.

Upon discovering his true lineage, Genis donned Kree Nega-Bands similar to those worn by his father, determined to carry on Mar-Veil’s legacy. Eager to uphold the tradition of heroism et forth by his father but naïve to the ways of [he world, Genis learned that power could be used wisely—abused easily. Plagued by doubts and insecurities, he agonized over how Mar—VeII would have approached any given situation. Ultimately, he realized that what Ii is father would have done didn’t matter. He had to start deciding how to live life on his own terms. Genis had finally begun to understand what it takes to be a hero. Formerly known as Legacy, he renamed himself Captain Marvel, after his father.

Rick and Genis later became pawns in the Destiny War, a time-spanning conflict. At the height of the battle, Captain Marvel found himself unwillingly merged with Rick—a process that triggered Genis’ Latent Cosmic Awareness. Now, Captain Marvel carries on his father’s crusade for universal justice—while sharing space with a well-traveled, well-meaning former teenage sidekick. Linked by destiny to Rick, he is driven to seek out and eliminate those forces that threaten the galaxy.

Here are the details