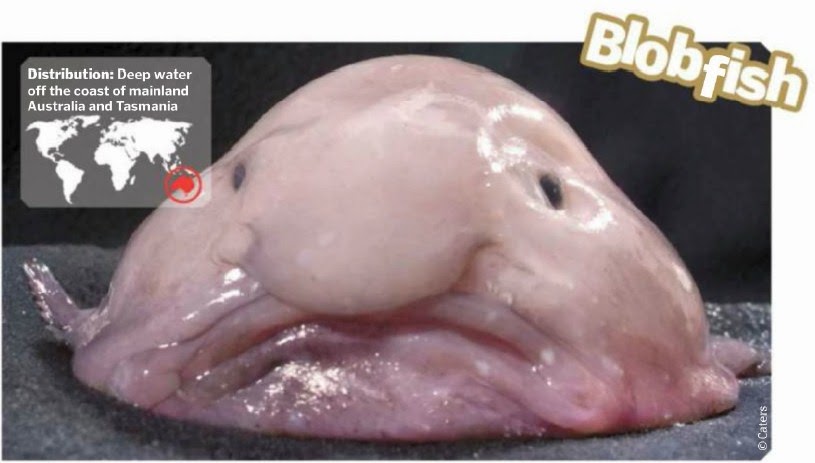 The blobtish is adapted to live in water 0.8 kilometers (haifa mile) deep. At this depth the pressure is 8o times higher than at sea level and a normal gas-tilled swim bladder is almost useless.

Most creatures at these depths give up trying to swim entirely and simply walk or flop a long the seabed. But flopping requires more energy and the blobfish is much too lazy for that.

It has traded almost all its muscle mass bra jelly that is just slightly less dense than water. This allows it to coast just above the ocean floor.

It doesn’t chase its prey, but simply swallows anything that’s slow or careless enough to get In the way of its mouth.

Unusually for a fish, the female ‘sits’ on her eggs, instead of just abandoning them after laying. This is probably to protect them from being eaten by other bloblish in the vicinity.

Due to its low density flesh, the blobfish's shape is very different when it is out of water. Its unappealing looks have created much discussion in media outlets.

The musician and author Michael Hearst featured a composition titled "Blobfish", inspired by the animal, on his 2012 album Songs For Unusual Creatures, and subsequently created a blobfish episode for his PBS Digital series.

In September 2013 the blobfish was voted the "World's Ugliest Animal", based on photographs of decompressed specimens, and adopted as the mascot of the Ugly Animal Preservation Society, in an initiative "dedicated to raising the profile of some of Mother Nature’s more aesthetically challenged children".
(amw/nm)
Posted by Tukang Warta
Share to: