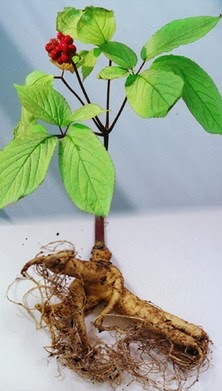 Ginseng has been called the king of herbs, the root of heaven, and a wonder of the world. Used in China, Korea, and India for several thousand years, Panax ginseng is probably the most famous medicinal herb to have come out of Asia. Its North American counterpart, Panax quinquefolius, was discovered later but has similar effects and is prized almost as highly. Ancient Indian texts speak of ginseng as a life-giving plant with magical powers. Centuries ago, Koreans believed that ginseng’s leaves gave off a glow on moonlit nights.

Ginseng hunters scanned the woods for the eerie radiance and shot arrows toward its source to mark the plant’s location so its valuable roots could be collected the next day. Ginseng hunting was fraught with dangers, but the rewards were great. As a result, wild ginseng in China had been harvested nearly to extinction by the 1600s. The discovery of Panax quinquefolius in North America in the early 1700s set off a ginseng rush. Many pioneers made a living digging ginseng roots out of the damp soil of eastern woodlands. Several early American entrepreneurs and explorers, including John Jacob Astor and Daniel Boone, were involved in the profitable ginseng trade, in which countless tons of American ginseng were exported to Asia.

Tonic
Diabetes
Immune system function
Ginseng is perhaps the best known of the herbal tonics, or adaptogens, with possible benefits for many different medical conditions. Adaptogens are often used to help strengthen the body to resist disease or to recover from illness. Each Panax species is a bit different; extracts of roots of different ginsengs contain different phytochemicals and thus have different effects. Laboratory research shows that extracts of both the whole root and isolated compounds act as antioxidants, affect immune system function, and combat inflammation.

Clinical research has been done mostly on Asian ginseng. While Asian ginseng doesn’t control symptoms such as hot flashes in menopausal women, preliminary results suggest that extracts may improve quality of life and lessen fatigue and psychological symptoms. For 36 people with type 2 non-insulin-dependent diabetes, both 100 and 200 mg of ginseng daily for 8 weeks helped with fasting glucose levels. Only those taking the larger dose had improvements in hemoglobin A1c tests, the standard tool for comparing blood sugar levels. Studies show that both ginseng species reduce blood sugar levels in people with type 2 diabetes.
Studies also show that American ginseng reduces blood glucose levels in type 1 diabetics. Both species of ginseng enhance immune function. In one study, a specific Asian ginseng extract boosted immune response to the flu vaccine and reduced the number of colds.

http://robust-chemical.com/lemari-asam-fume-hood-based-on-wooden-structure/ .adv - Blood pressure should be monitored when taking ginseng. Caution is advised for diabetics because ginseng can lower blood sugar levels. Asian ginseng can act as a stimulant, causing insomnia or anxiety; some people experience mild stomach upset or headache.