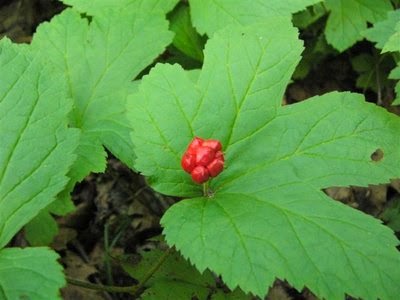 An American native, goldenseal is a member of the buttercup family that once grew in great abundance in the eastern deciduous forests of the United States. The golden part of its common name comes from the bright yellow interior of the plant’s fleshy rhizomes (underground stems). Seal is a reference to small, circular marks on the rhizome’s twisted, wrinkled surface that were thought to resemble the decorative seals once used to stamp warm wax onto envelope flaps.
Native American tribes used goldenseal to produce a beautiful golden yellow dye. They also used the herb medicinally and introduced European settlers to its healing properties in the 1700s. A century later, goldenseal had gained such popularity that it was severely overharvested, an assault that continued into the 20th century, until wild stocks were legally protected. Now cultivated, but still scarce in the wild, goldenseal is a top-selling herbal supplement marketed to aid digestion, to treat infection, and to boost the immune system.

Digestive aid
Diarrhea
Antimicrobial
Woodland goldenseal is one of the best-known indigenous North American plants. It was widely used by eastern tribes. Goldenseal was an official drug in the United States almost continuously from 1830 to 1955. During the late 19th and early 20th centuries, a number of pharmaceutical companies, including Parke-Davis, Eli Lilly, and Squibb, manufactured and sold goldenseal products. Today, goldenseal remains a popular herbal remedy in the United States, particularly for the treatment of gastrointestinal complaints.
Looking to the past can often prove useful when researching medicinal plants. As a clear demonstration of that, scientists at the University of Chicago recently found, in test-tube studies, that goldenseal extracts are highly active against multiple strains of Helicobacter pylori, a bacterium that is responsible for the majority of peptic ulcers and gastric cancers. While there are many compounds that contribute to the overall medicinal effects of goldenseal, berberine, a yellow alkaloid, is the primary infection fighter. Berberine destroys many microorganisms that cause diarrhea, including Giardia lamblia and Entamoeba histolytica. These organisms cause chronic diarrhea and can lead to significant dehydration and weight loss. Goldenseal and other plants containing berberine could play an important public health role, given that approximately 20 percent of the world’s population is chronically infected with Giardia and some 50 million people are infected with the amoeba E. histolytica.
Goldenseal can be found in salves and ointments designed to help heal skin infections. Research has shown that berberine is effective for the treatment of psoriasis and may also be useful for minor fungal infections of the skin. While the taste of goldenseal is quite bitter, it can be very effective as a mouthwash and can also be used for treating canker sores and mouth ulcers.

Tea: Due to its bitterness, goldenseal is quite unpalatable as a tea.
Capsule: Generally, 1 to 3 g per day.
Tincture: Take 2 to 4 ml, 2 to 3 times per day.
Topical: Salves and ointments are readily available. Use as directed.

Goldenseal may stimulate uterine contractions and is therefore generally not recommended for use during pregnancy. Goldenseal can also interact with enzymes in the body that metabolize certain prescription medications. People taking other medications should check with their health-care professionals or pharmacists before taking goldenseal.