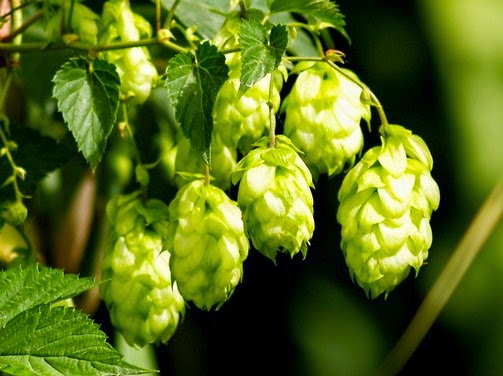 Hops are the pale green, cone-like fruits of a hardy, twining vine native to Europe, western Asia, and North America. They are probably best known by brewers—and beer drinkers—for giving aroma and flavor to beer. Interestingly enough, hops were originally added to beer for their natural preservative properties. Only later did they come to be valued for the bitter, but agreeable, taste they impart to the drink. The Romans ate the young shoots of the hops plant as if it were asparagus, a practice that continued in rural parts of the British Isles well into the 20th century. Roman physician Pliny the Elder named hops Lupus salictarius, which means “willow wolf” and refers to the vine’s habit of twining around other plants and strangling them, like a wolf does to sheep. The plant’s species name, lupulus, is Latin for “small wolf,” a similar reference. Hops were used medicinally in Europe and by Native Americans in North America. Today, their greatest value in herbal medicine is as a calming, natural sedative.

Though most famous as an ingredient vital to brewing beer, hops have been used to improve appetite and digestion, to relieve toothache and nerve pain, and to treat insomnia around the world. It is said that Abraham Lincoln relied upon hops pillows to relax and to improve his sleep.

Today, Germany’s health authorities continue to approve the use of hops for “discomfort due to restlessness or anxiety and sleep disturbances.” Most of the scientific research evaluating the effectiveness of hops for anxiety and sleep has been conducted with a combination of hops and valerian, another popular sedative herb. Three controlled studies have shown that this combination is more effective than placebo and similar in effectiveness to benzodiazepines (sleep medications) for shortening the time it takes to fall asleep and for improving sleep quality. None of the studies reported excessive morning sleepiness or rebound insomnia when the participants stopped taking the herbs.

One area that is garnering attention is the potential use of hops for the relief of menopausal symptoms. Researchers have identified at least one key compound in hops, 8-prenylnaringenin, that is linked to significant hormonal activity. A 6-week study in menopausal women found that a standardized hops extract reduced hot flashes, night sweats, and insomnia. Another study found that a topically applied gel containing hyaluronic acid, vitamin E, and hops extract significantly improved vaginal dryness in postmenopausal women. Hops might prove to be an attractive alternative to conventional hormone therapy, but more research is needed to determine long-term safety.

Given the potential for increased hormonal activity stimulated by hops, women who have had breast cancer or who are at risk for it should avoid hops until more is known. Safety in pregnancy is not known. Hops may have sedative effects, so driving or operating heavy machinery should not be attempted while using hops.