For practitioners of Voudon, the asson is a sacred rattle, made from a large dried-out gourd with seeds inside, and covered with beads and snake bones. It is used in important rites and ceremonies and is itself a symbol of the authority of the Houngan, the Voudon priest who is considered the Chief of the Spirits. The asson is the equivalent of the scepter. It is a larger object than the musical instrument called the cha cha, although they do have a similar appearance.

This is the seal that was designed by Aleister Crowley as the emblem of his Esoterical Magickal Order, the Astrum Argentum, or “Silver Star.” The seal uses a seven-pointed star as the basis of its design. See also Cancellarius seal.

This is the ceremonial knife used by a witch. It generally has a black handle, and is used to mark a magical circle, for example, or to direct energy, but is never used to cut anything. For physical cutting, a boline is used. The pointed shape of the blade of the athame suggests the element of fire, which it also symbolizes. The athame is balanced by the chalice, which represents water. 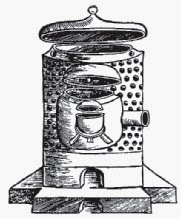