Hawkeye - Fight for Moral But Got Anti—authoritarian Philosophy 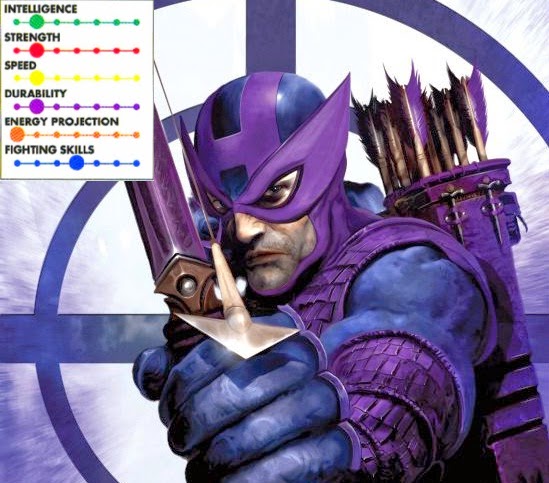 articlemostwanted - Clint Barton’s parents were killed in an automobile accident when he was 8 years old, and the youngster was placed in a state orphanage. At 14, Barton ran away to join a traveling carnival, where he apprenticed himself to the show’s star attraction, the mysterious rogue known only as the Swordsman. Recognizing Barton’s natural flair for archery, the Swordsman agreed to tutor him in the art. For years, Barton practiced with the bow and arrow eight hours a day. Soon, he became a good enough trick—shooter to perform professionally under the name Hawkeye the Marksman.

Witnessing Iron Man in action, Barton attempted to emulate the hero by donning a colorful costume and employing his archery skills to fight crime. During his first public appearance, Hawkeye was mistaken for a thief by police and found himself actually fighting Iron Man, the adventurer who had inspired his efforts. Weeks later, Barton’s attraction to the Black Widow led him to actually commit criminal acts. But even when he was getting away with it, Hawkeye knew deep down he had strayed from his quest to become a hero. When he approached the Avengers, Iron Man sponsored his membership on the team.

Hawkeye lives life on the edge, straddling the fine line between right and wrong with a battle—ready swagger that masks an inner struggle for acceptance. For years he served as a valued member of the Avengers, his archery skills complementing his associates’ superhuman powers. But Barton’s bravado in battle and stubborn refusal to accept orders at face value frequently put him at odds with Captain America, an old-school Army man not used to subordinates questioning his commands in the field.

Dissatisfied with his role, the master marksman parted ways with the Avengers to join the Thunderbolts, one—time super—villains seeking redemption for past crimes by proving themselves as heroes. Having walked a mile outside the law himself, Hawkeye empathized with the Thunderbolts’ plight—and the former criminals’ state of mind. In leading the wayward adventurers, he hoped to lend credibility to their efforts. Hawkeye was lucky enough to find a better life, and he thinks others can do the same. All they need is someone who’s willing to show them the way.

Heroes are expected to play by the rules, and Hawkeye does—his own. And he’s willing to live with the hard choices and moral compromises his anti—authoritarian philosophy entails.