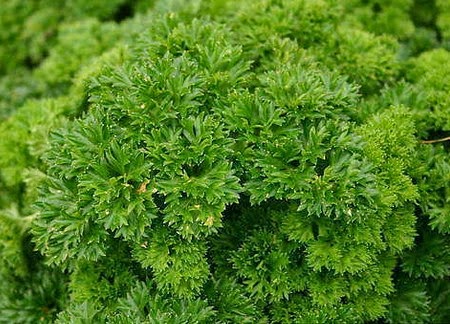 With leaves either curly or flat, parsley is one of the world’s most widely used herbs. It is an essential ingredient in many Middle Eastern, European, and American dishes. Parsley also has become a nearly ubiquitous garnish, typically ignored, on plates of restaurant food. The ancient Greeks treated parsley with far more respect. Associating the herb with death and oblivion, they believed it to be sacred to the dead. Over the centuries, parsley attracted other superstitions. Pluck a sprig of parsley while chanting the name of an enemy, and you could bring about his or her demise. Transplant it, give it away, or pick it when in love, and disaster of some sort would inevitably follow. The Romans appear to have been the first to use parsley as a culinary herb, and its cultivation spread slowly north and east. By the Middle Ages, parsley had been elevated from an ingredient in sauces and salads to a respected medicinal herb. Today, parsley is still used for health problems, including urinary tract infections.

Kidney stones
Diuretic
Urinary tract infections
High blood pressure
This mild-tasting herb is the plant to turn to when suffering from one of the body’s most excruciating conditions—kidney stones. The pain is relieved in various ways through parsley’s medicinal effects. All parts of the parsley plant—leaf, root, and seeds—contain fragrant oils that have diuretic effects, may increase blood flow to the kidney, and reduce inflammation of the urinary tract. Only the root, however, has been approved for use as a diuretic by Germany’s Commission E, which oversees the efficacy and effectiveness of medicinal herbs. With diuresis, and possibly through irritation of the inside of the urinary tract, the movement of kidney stones may be facilitated. Parsley’s diuretic, circulatory, and anti-inflammatory effects also contribute to its ability to fight infections of the urinary tract, such as cystitis. In theory, parsley’s diuretic properties might help in lowering blood pressure.

Food: Parsley is first and foremost a food, a fresh or dried herb that is part of recipes in many cultures. It is possible that some of the medicinal effects are obtained in this way, though higher doses are usually recommended. Conditions of the urinary tract, for example, require approximately 6 g daily of parsley leaves or roots.
Tincture: Generally, alcohol extracts, or tinctures, of parsley are dosed at 1 to 2 ml, 3 times daily.
Capsules: 450 to 900 mg of parsley leaf, up to 3 times daily.
Tea: Pour 1 cup of boiling water over ¼ cup (or 2 to 3 tablespoons) fresh parsley leaves. Let stand for 5 minutes, strain, and drink, up to 3 times daily. Tea can be sweetened if desired.

Parsley may stimulate both menstrual flow and the uterus, so it is not appropriate for pregnant women. Parsley may react with sunlight on the skin to cause a rash, particularly in lighter-skinned people. The varied effects that parsley has on the kidneys warrant caution in anyone with kidney disease. In order to prevent an unsafe drop in blood pressure, care also should be exercised if parsley is used with high-blood-pressure medications.