Quicksilver - an Honorable Man and a Hero at Heart 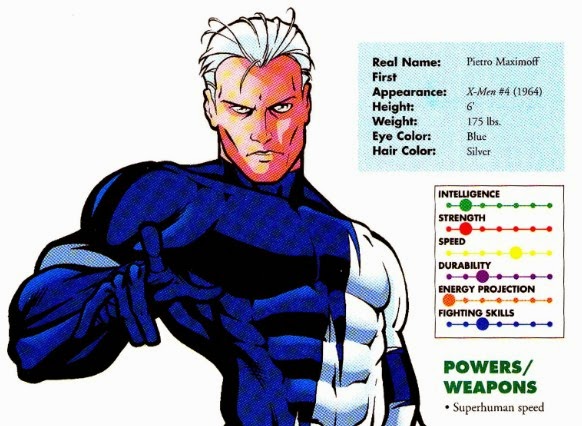 articlemostwanted - Orphaned at birth, Pietro and Wanda Maximoff were raised by gypsies. As adolescents, the twins discovered they possessed unusual superhuman abilities. Wanda could cause strange phenomena to occur, and Pietro moved faster than the blink of an eye. When their adoptive father stole food to feed his starving family, enraged villagers attacked the gypsy camp. Using his incredible speed, Pietro took flight with his sister. For the next few years, they wandered Central Europe, living life on the run.

Visiting a small village, Wanda accidentally caused a house to burst into flame with her uncontrollable hex-casting abilities. Despite Pietro’s attempts to defend his sister from superstitious townspeople, the siblings soon were overpowered. They were about to be killed when Magneto arrived on the scene and rescued the young mutants. Fearing the charismatic subversive’s wrath, the Scarlet Witch and Quicksilver served their new master out of obligation. As members of Magnetos Brotherhood of Evil Mutants, they aided and abetted his terrorist campaign against humanity.

When the Brotherhood disbanded, Pietro and Wanda recognized the error of their ways and sought redemption for their actions. No longer pawns in a madman’s quest for power, they successfully petitioned for membership in the Avengers. Only later did they discover the truth regarding their parentage. Hoping to sway Pietro and Wanda to rejoin his crusade against humanity, Magneto confronted them with the revelation that he was their true father, but they denounced him and his cause.

Gifted with the ability to think and move at superhuman speeds, the quick-tempered Pietro is uncomfortable standing still. Plagued by impulsive decisions and rash actions, Quicksilver strives to achieve a semblance of equilibrium in his life. So far, such balance has eluded him. Undermined by neglect and infidelity, Pietro’s marriage to Crystal of the In humans was doomed to fail despite repeated attempts at reconciliation and the birth of their daughter Luna.

Pietro bears the heavy burden of his father’s legacy—and his own shortcomings as a man, a husband and a father. Still, Quicksilver continues to forge ahead—seeking direction, purpose and a life outside Magneto’s shadow. Often considered arrogant, unlikable and overconfident, he does not care how others perceive him. His father’s son, Pietro has inherited Magneto’s poise, confidence and strength. Although sometimes frightened by what he sees in the mirror, he is a reflection of the man his father once was—and would have been, had he not given in to the hare and anguish that eventually corrupted his soul. Pietro’s has been a turbulent life, but he has made peace with who and what he truly is; an honorable man and a hero at heart.
Posted by Tukang Warta
Share to: