The Odyssey Of Homer 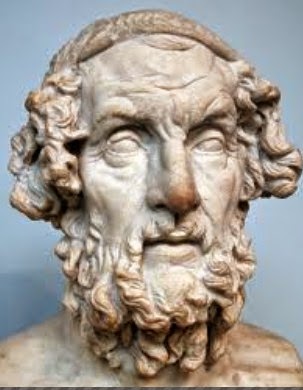 articlemostwanted - Homer is the presumed author of the Iliad and the Odyssey. Although these two great epic poems of ancient Greece  have always been attributed to the shad-owy ?gure of Homer, little is known of him beyond the fact that his was the name attached in antiquity by the Greeks themselves to the poems. That there was an epic poet called Homer and that he played the primary part in shaping the Iliad and the Odyssey—so much may be said to be probable. If this assumption is accepted, then Homer must assuredly be one of the greatest of the world’s literary artists.

He is also one of the most in? uential authors in the widest sense, for the two epics provided the basis of Greek education  and culture throughout the Classical age and formed the backbone of humane education down to the time of the Roman Empire and the spread of Christianity. Indirectly through the medium of Virgil’s  Aeneid (loosely molded after the patterns of the  Iliad and the Odyssey), directly through their revival under Byzantine culture from the late 8th century  CE  onward, and subsequently through their passage into Italy with the Greek scholars who ?ed westward from the Ottomans, the  Homeric epics had a profound impact on the Renaissance culture of Italy. Since then the proliferation of translations has helped to make them the most important poems of the classical European tradition.

Implicit references to Homer and quotations from the poems date to the middle of the 7th century  BCE . Archilochus, Alcman, Tyrtaeus, and Callinus in the 7th century and Sappho and others in the early 6th adapted Homeric phraseology and metre to their own purposes and rhythms. At the same time scenes from the epics became popular in works of art. The pseudo-Homeric “Hymn to Apollo of Delos,” probably of late 7th-century composition, claimed to be the work of “a blind man who dwells in rugged Chios,” a reference to a tradition about Homer himself. The idea that Homer had descendants known as “Homeridae,” and that they had taken over the preservation and propagation of his poetry, goes back at least to the early 6th century BCE.

It was not long before a kind of Homeric scholarship began: Theagenes of Rhegium in southern Italy toward the end of the same century wrote the ?rst of many allego-rizing interpretations. By the 5th century biographical ?ctions were well under way. The Pre-Socratic philoso-pher Heracleitus of Ephesus made use of a trivial legend of Homer’s death—that it was caused by chagrin at not being able to solve some boys’ riddle about catching lice—and the concept of a contest of quotations between Homer and Hesiod (after Homer, the most ancient of Greek poets) may have been initiated in the Sophistic tradition. The historian Herodotus assigned the formulation of Greek theology to Homer and Hesiod, and claimed that they could have lived no more than 400 years before his own time, the 5th century BCE. This should be contrasted with the super?cial assumption, popular in many circles throughout antiquity, that Homer must have lived not much later than the Trojan War about which he sang.

The general belief that Homer was a native of Ionia (the central part of the western seaboard of Asia Minor) seems a reasonable conjecture for the poems themselves are in predominantly Ionic dialect. Although Smyrna and Chios early began competing for the honour (the poet Pindar, early in the 5th century BCE, associated Homer with both), and others joined in, no authenticated local memory survived anywhere of someone who, oral poet or not, must have been remarkable in his time.

Modern scholars agree with the ancient sources only about Homer’s general place of activity. The most concrete piece of ancient evidence is that his descendants, the Homeridae, lived on the Ionic island of Chios.
Admittedly, there is some doubt over whether the Iliad and the Odyssey were even composed by the same main author. Such doubts began in antiquity itself and depended mainly on the difference of genre (the Iliad being martial and heroic, the Odyssey picaresque and often fantastic), but they may be reinforced by subtle differences of vocabulary even apart from those imposed by different subjects. The similarities of the two poems are partly due to the coher-ence of the heroic poetical tradition that lay behind both.

Partly on the basis of the internal evidence of the poems, which is of some use in determining when Homer lived, it seems plausible to conclude that the period of composition of the large-scale epics (as distinct from their much shorter predecessors) was the 9th or 8th century, with several features pointing more clearly to the 8th. The Odyssey may belong near the end of this century, the Iliad closer to its middle. It may be no coincidence that cults of Homeric heroes tended to spring up toward the end of the 8th century, and that scenes from the epic begin to appear on pots at just about the same time.

Homer as an Oral Poet

But even if his name is known and his date and region can be inferred, Homer remains primarily a projection of the great poems themselves. Their qualities are signi?cant of his taste and his view of the world, but they also reveal something more speci?c about his technique and the kind of poet he was. Homeric tradition was an oral one: this was a kind of poetry made and passed down by word of mouth and without the intervention of writing. Indeed Homer’s own term for a poet is aoidos, “singer.” Ordinary aoidoi, whether resident at a royal court or performing at the invi-tation of a town’s aristocracy, worked with relatively short poems that could be given completely on a single occasion. These poems must have provided the backbone of the tra-dition inherited by Homer. What Homer himself seems to have done is to introduce the concept of a quite different style of poetry, in the shape of a monumental poem that required more than a single hour or evening to sing and could achieve new and far more complex effects, in liter-ary and psychological terms, than those attainable in the more anecdotal and episodic songs of his predecessors.

Even apart from the possibilities of medium-scale elabo-ration, the Iliad and the Odyssey exemplify certain of the minor inconsistencies of all oral poetry, and occasionally the composer’s amalgamation of traditional material into a large-scale structure shows through. Yet the overriding impression is one of powerful unity.

The Iliad—consisting of more than 16,000 verses, which would have taken four or ?ve long evenings, and perhaps more, to perform—is not merely a distillation of the whole protracted war against Troy. It is simulta-neously an exploration of the heroic ideal in all its self-contradictoriness—its insane and grasping pride, its magni?cent but animal strength, its ultimate if obtuse humanity. The poem is, in truth, the story of the wrath of Achilles, the greatest warrior on the Greek side, that is announced in its very ?rst words. Yet for thousands of verses on end Achilles is an unseen presence. Much of the poetry between the ?rst book, in which the quarrel ?ares up, and the 16th, in which Achilles makes the crucial concession of allowing his friend Patroclus to ?ght on his behalf, consists of long scenes of battle, in which individual encounters alternate with mass movements of the opposing armies. The battle poetry is based on typical and frequently recur-ring elements and motifs, but it is also subtly varied by highly individualized episodes and set pieces: the catalog of troop contingents, the formal duels between Paris and Menelaus and Ajax and Hector, Helen’s identifying of the Achaean princes, and so on. Patroclus’s death two-thirds of the way through the poem brings Achilles back into the ?ght. In book 22 he kills the deluded Hector. Next he restores his heroic status by means of the funeral games for Patroclus, and in the concluding book, Achilles is compelled by the gods to restore civilized values and his own magna-nimity by surrendering Hector’s body to King Priam.

The Odyssey tends to be blander in expression and sometimes more diffuse in the progress of its action, but it presents an even more complex and harmonious structure than the Iliad. The main elements include the situation in Ithaca, where Penelope, Odysseus’s wife, and their young son, Telemachus, are powerless before her arrogant suitors as they despair of Odysseus’s return from the siege of Troy, as well as Telemachus’s secret journey to the Peloponnese for news of his father, and his encounters there with Nestor, Menelaus, and Helen. Odysseus’s dangerous pas-sage, opposed by the sea-god Poseidon himself, from Calypso’s island to that of the Phaeacians, and his narra-tive of his fantastic adventures after leaving Troy, including his escape from the cave of the Cyclops, Polyphemus, fol-lows. His arrival back in Ithaca, solitary and by night, at the poem’s halfway point, is followed by his meeting with his protector-goddess Athena, his elaborate disguises, his self-revelation to the faithful swineherd Eumaeus and then to Telemachus, their complicated plan for disposing of the suitors, and its gory ful?llment. Finally comes the recognition by his faithful Penelope, his recounting to her of his adventures, his meeting with his aged father, Laertes, and the restitution, with Athena’s help, of stability in his island kingdom of Ithaca.

Homer’s in?uence seems to have been strongest in some of the most conspicuous formal components of the poems. The participation of the gods can both dignify human events and make them seem trivial—or tragic. It must for long have been part of the heroic tradition, but the frequency and the richness of the divine assemblies in the Iliad, or the peculiarly personal and ambivalent rela-tionship between Odysseus and Athena in the Odyssey, probably re?ect the taste and capacity of the main com-poser. The Iliad and the Odyssey owe their unique status to the creative con?uence of tradition and design, the crys-talline ?xity of a formulaic style, and the mobile spontaneity of a brilliant personal vision. The result is an impressive amalgam of literary power and re?nement. The Iliad and the Odyssey, however, owe their preeminence not so much to their antiquity and to their place in Greek culture as a whole but to their timeless success in expressing, on a massive scale, so much of the triumph and the frustration of human life.

from: JE. Luebering - The 100 Most Influential Writers of All Time