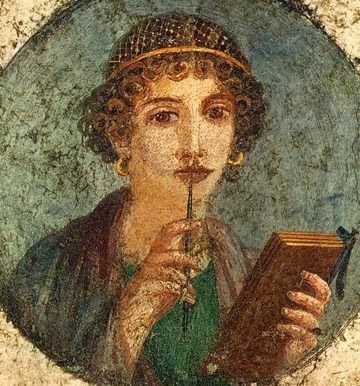 No ancient biography of Catullus survives. A few facts can be pieced together from external sources and in the works of his contemporaries or of later writers, supplemented by inferences drawn from his poems, some of which are certain, some only possible. Catullus was alive 55–54 BCE on the evidence of four of his poems, and died young, according to the poet Ovid—at the age of 30 as stated by St. Jerome (writing about the end of the 4th century), who nevertheless dated his life erroneously 87–57 BCE. Catullus was thus a contemporary of the statesmen Cicero, Pompey, and Julius Caesar, who are variously addressed by him in his poems. He preceded the poets of the immediately succeeding age of the emperor Augustus, among whom Horace, Sextus Propertius, Tibullus, and Ovid name him as a poet whose work is familiar to them. Catullus owned property at Sirmio, the modern Sirmione, on Lake Garda, though he preferred to live in Rome and owned a villa near the Roman suburb of Tibur, in an unfashionable neighborhood.

In a poem externally datable to c. 57–56 BCE, Catullus reports one event, a journey to Bithynia in Asia Minor in the retinue of Gaius Memmius, the Roman governor of the province, from which he returned to Sirmio. His poetry also records two emotional crises, the death of a brother whose grave he visited in the Troad, also in Asia Minor, and an intense and unhappy love affair, portrayed variously in 25 poems, with a woman who was married and whom he names Lesbia, a pseudonym (Ovid states) for Clodia, according to the 2nd-century writer Apuleius. (She may have been a patrician, one of the three Clodia sisters of Cicero’s foe Publius Clodius Pulcher. All three were the subject of scandalous rumour, according to Plutarch.) His poems also record, directly or indirectly, a homosexual affair with a youth named Juventius.

Among his longer poems are two marriage hymns; one romantic narrative in hexameters (lines of six feet) on the marriage of Peleus with the sea goddess Thetis; and four elegiac pieces, consisting of an epistle introducing a translation of an elegant conceit by the Alexandrian poet Callimachus, followed by a pasquinade, or scurrilous conversation, between the poet and a door, and lastly a soliloquy addressed to a friend and cast in the form of an encomium, or poem of praise.

In his lifetime, Catullus was a poet’s poet, addressing himself to fellow craftsmen (docti, or scholarly poets), especially to his friend Licinius Calvus, who is often posthumously commemorated along with him. The conversational rhythms of his poetry, as he managed them for lyric purposes, achieved an immediacy that no other classic poet can rival. For the general reader, the 25 Lesbia poems are likely to remain the most memorable, recording as they do a love that could register ecstasy and despair and all the divided emotions that intervene. Two of them with unusual metre recall Sappho, the poet of the Aegean island of Lesbos, as also does his use of the pseudonym Lesbia. The quality of his poems of invective, which spare neither Caesar nor otherwise unknown personalities, is uneven, ranging from the high-spirited to the tedious, from the lapidary to the labored. But their satiric humor is often effective, and their obscenity reflects a serious literary convention that the poet himself defends.
Posted by Tukang Warta
Share to: