Alluvium - The Sediment Deposited by Rivers 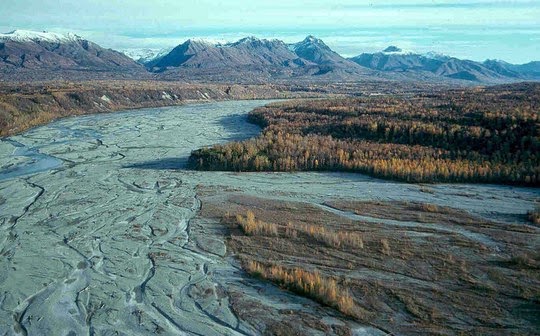 articlemostwanted - THE SEDIMENT DEPOSITED by rivers is called alluvium. The name derives from the Latin word alluvius, meaning “washed up.” Alluvium comprises clay, silt and sand (in some definitions gravel is included) and derives from the erosion of rocks and soils in the upper reaches of river basins. The mineral characteristics of the alluvium thus reflect its origins. It is carried downstream until the energy or sediment-carrying capacity of the river diminishes and the water can no longer carry the sediment in suspension.

During carriage, the sediment may be altered in physical character because of sorting and attrition. Sorting involves the separation of particles on the basis of size with finer and thus less dense particles like clay being carried farther downstream than larger and coarser particles such as sand and gravel. Attrition occurs as sediment particles collide during transport; overall, this causes a reduction in particle size and a general rounding in shape as angular material is smoothed.

The deposition of alluvium in river channels, on floodplains, in estuaries, deltas, and lakes takes place over time. The erosional, depositional, and attritional regimes of a river may also change over time depending on climate and land-use characteristics in the river catchment.

Alluvium is widespread globally. It may provide fertile agricultural land because it is rich in nutrients, and it has provided the means for some of the world’s great civilizations to develop and thrive. Examples include those of ancient EGYPT based on the NILE Valley, those of the Indus civilization in the valley of the same name, and those of ancient Mesopotamia in the Tigris and Euphrates Valleys. Today, some of the world’s most productive agricultural land is on alluvium, as are many of the world’s major urban areas, for example, LONDON, Bangkok, BUENOS AIRES, Cairo, MUMBAI (Bombay), and Shanghai. In many cases, there is conflict of interest in relation to land use as urban spread competes with agriculture and sediment extraction, such is the value and prized location of alluvial deposits.

Where alluvium comprises the fine particles of clay, it can be used for brick making and pottery, and where gravel predominates, it is sometimes excavated for use as road aggregate and building materials. If ore bearing rocks occur in the upper catchment of a river, the alluvium resulting from their erosion may be sufficiently mineral rich to warrant extraction. The most important metallic minerals found in alluvium include tin, gold, and platinum. Precious stones such as diamonds may also be found if catchment rocks are a source of gem stones.