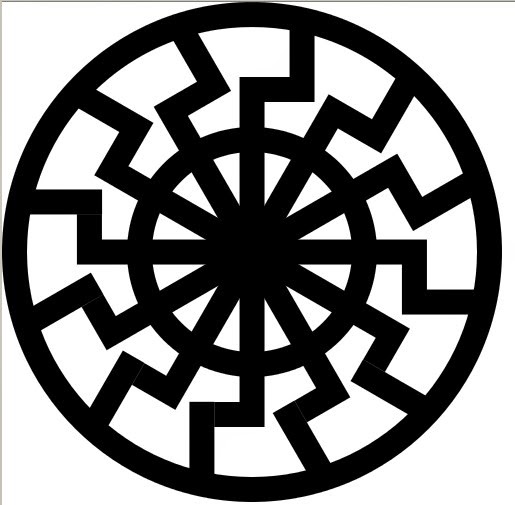 articlemostwanted - The notion of the Sun being black runs completely counter to what is generally accepted about it; the simplest explanation for a Black Sun is that it describes what happens at night, when the Sun is casting its light on another part of the planet. However, the Black Sun more sinisterly denotes the idea of the world going wrong, destructive forces, disaster, and even death.

Whether the Nazis were aware of this aspect of the Black Sun is open to conjecture. The symbol reproduced for this entry was also called the “Sonnenrad” or Sun Wheel and was based on the design of early medieval brooches, some of which had a swastika in the center. The “rays” numbered between five and twelve, with the twelve-rayed symbol denoting the passage of the Sun through the months of the year. The rays bear a great deal of resemblance to the swastika and to the lightning flash symbols used by the SS, themselves the same as a rune known as “Sig,” meaning “Sun” or “Victory.”

The symbol, used by wartime German occult mystics and still employed by some neo-Nazis, is based on a mosaic set into the floor of the early seventeenth-century castle of Wewelsburg in Germany. Himmler decided that the site of the castle would be the center of the proposed “New World” once victory was achieved. However, the extensive building works planned for the castle were never completed; the ambitious “New World” failed to materialize and the building work that had been started was blasted to the ground in 1945. The mosaic remains, although there is no concrete evidence as to who put it there. The mosaic is of dark green marble, set into a cream-colored marble floor.

For neo-Nazis, the symbol has proved a useful one. The single swastika is banned in Germany, and yet the Black Sun symbol hides three swastikas within it. Further significance is accorded the symbol since it contains twelve of the aforementioned Sig runes from the Futhark runic system. The circular shape of the symbol implies protection and magical powers. Secret signs, indeed.

Alchemists and hermeticists believe that there are two Suns; one of the pure “philosophical gold” that implies the highest attainment of the Spirit, and the other of the baser “material gold.” The Black Sun is the symbol of this material form of the Sun, and symbolizes the unworked, primal matter that needs to be developed.
Posted by Tukang Warta
Share to: