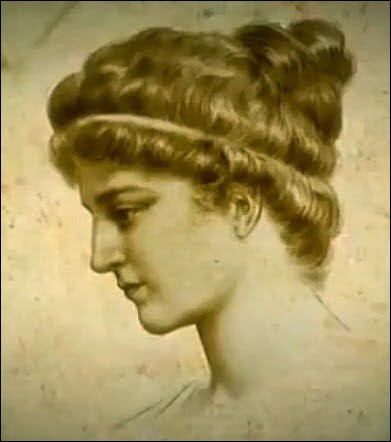 (b. c. 370, Alexandria, Egypt—d. March 415, Alexandria)
articlemostwanted - The Egyptian Neo-Platonist philosopher Hypatia was also the first notable woman in the field of mathematics.
The daughter of Theon, also a notable mathematician and philosopher, Hypatia became the recognized head of the Neo-Platonist school of philosophy at Alexandria about 400, and her eloquence, modesty, and beauty, combined with her remarkable intellectual gifts, attracted a large number of pupils. Among them was Synesius of Cyrene, afterward bishop of Ptolemaist (c. 410), several of whose letters to her are still extant.

This left Hypatia in a precarious situation. Theodosius I, Roman emperor in the East from 379 to 392 and then emperor in both the East and West until 395, initiated an official policy of intolerance to paganism and Arianism in 380. In 391, in reply to Theophilus, the bishop of Alexandria, he gave permission to destroy Egyptian religious institutions. Christian mobs obliged by destroying the Library of Alexandria, the Temple of Serapis, and other pagan monuments. Although legislation in 393 sought to curb violence, particularly the looting and destruction of Jewish synagogues, a renewal of disturbances occurred after the accession of Cyril to the patriarchate of Alexandria in 412. Tension culminated in the forced, albeit illegal, expulsion of Alexandrian Jews in 414 and the murder of Hypatia, the most prominent Alexandrian pagan, by a fanatical mob of Christians in 415. The departure soon afterward of many scholars marked the beginning of the decline of Alexandria as a major center of ancient learning.

According to the Suda Lexicon, a 10th-century encyclopedia, Hypatia wrote commentaries on the Arithmetica of Diophantus of Alexandria, on the Conics of Apollonius of Perga, and on an astronomical canon (presumably Ptolemy’s Almagest). We have it on the authority of her father, Theon, that she revised Book III of his commentary on the Almagest. All of these works are lost, although some may survive as parts of the extant Arabic versions of the Arithmetica. The known titles of her works, combined with the letters of Synesius who consulted her about the construction of an astrolabe and a hydroscope (identified in the 17th century by Pierre de Fermat as a hydrometer), indicate that she devoted herself particularly to astronomy and mathematics. The existence of any strictly philosophical works by her is unknown. Indeed, her philosophy was more scholarly and scientific in its interest and less mystical and intransigently pagan than the Neo-Platonism taught in other schools. Nevertheless, statements attributed to her, such as “Reserve your right to think, for even to think wrongly is better than not to think at all” and “To teach superstitions as truth is a most terrible thing,” must have incensed Cyril, who in turn incensed the mob.

Hypatia reputation as a learned and beautiful female philosopher, combined with the dramatic details of her grisly death, have inspired the imaginations of numerous writers, inspiring works such as Charles Kingsley’s novel Hypatia: New Foes with an Old Face (1852).