She-Hulk - the World’s Only Green-Skinned Lawyer 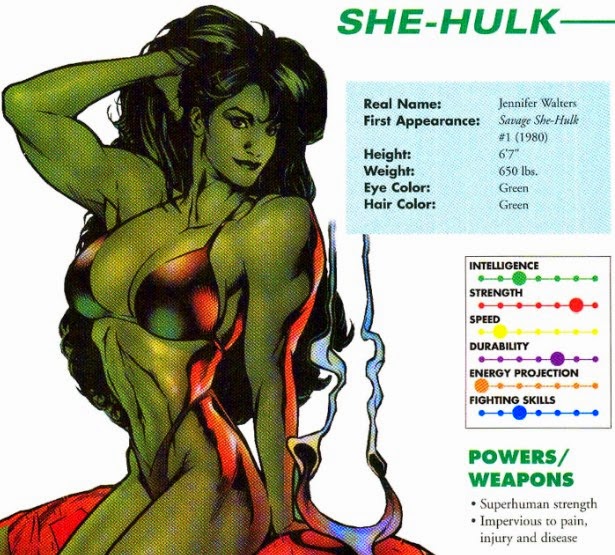 articlemostwanted - Jennifer Walters spent the summers of her childhood with her first cousin Bruce Banner, and the two became as close as brother and sister. The bookish Bruce and equally academic and mousy Jennifer shared an affinity for intellectual pursuits that further served to cement their strong, sibling-like bond. Bruce went on to study medicine and physics, while Jennifer pursued a career in law. They lost touch when Bruce began work on the military’s top-secret gamma bomb. After graduating, Jennifer established herself as a criminal attorney in Los Angeles.

Years later, Bruce sought out Jennifer to confide in her the emotional trauma of his double life as the Hulk. At the time, Jennifer had been defending a criminal named Lou Monkton, who was framed by gangster Nicholas Trask for murder. As Jennifer drove Bruce to her Los Angeles home, one of Trask’s henchmen made an attempt on her Life. With his cousin rapidly losing blood from a gunshot wound, Bruce improvised an emergency transfusion. Shortly thereafter, Jennifer’s anger triggered a transformation into a 6’7”, 650-lb. mass of muscle. Retaining her intelligence as She-Hulk, Jennifer embarked upon a career as a part-time crime fighter.

Jennifer derived great satisfaction from her adventures as She-Hulk. Although at first able to revert to human form at will, she rarely did so. It has been speculated that gamma-induced mutations unleash a suppressed aspect of the affected individual’s personality. Bruce’s repressed rage emerged as a savage, childlike persona, while Jennifer’s new found physique sent her self-confidence soaring.

She-Hulk initially operated in Southern California, hut her reputation spread quickly. She eagerly put her law career on hold and left California to join the Avengers, and later served as a member of Heroes for Hire, Inc. Standing in for the Thins as the Fantastic Four’s resident powerhouse, She-Hulk became a de facto member of both the team and the family. Jennifer has since returned to the courtroom, turning heads as the world’s only green-skinned lawyer, but remains eager to trade power suits for skintight spandex when called upon by Earth’s mightiest heroes.
Posted by Tukang Warta
Share to: