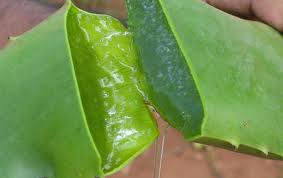 Native to North Africa and coastal areas surrounding the Mediterranean Sea, aloe vera is one of the most familiar of all herbal remedies, it has many benefits. Pots of aloe grace many sunny kitchen windowsills, where the thick, fleshy leaves stand ready to become a quick and easy treatment for scalds and burns. A leaf plucked from the plant and sliced open shelters at its core a clear, mucilaginous gel that is remarkably effective for soothing wounds and burns, speeding healing, and reducing risk of infection. The bitter, yellowish sap that oozes from the leaf’s skin—not to be confused with the gel—is dried to form aloe latex, a crystalline substance.

Burns (first- and second-degree)
Psoriasis
Colitis
Diabetes
Aloe is famous for soothing sunburn. Perhaps less well known is how broadly its healing properties extend—from soothing minor cuts and skin conditions to possibly lowering blood sugar levels in diabetics.
Aloe gel is the inner mucilaginous—or gooey—part of the leaf and is used topically for many skin conditions. Recent research shows that ingesting this gel confers benefits in lowering blood glucose in people with diabetes and easing symptoms in people with ulcerative colitis. Aloe gel contains polysaccharides, compounds that have a soothing effect on mucous membranes, and enzymes that coat irritated skin and ease pain. Aloe may also be antibacterial. For these reasons, aloe has been used for some skin conditions, such as first- and second-degree burns and psoriasis, and it sometimes shows better effects than more conventional therapies. In a study of 30 people with second-degree burns, aloe cream, containing 0.5 percent of the gel in powdered form, helped to heal the burns faster than sulfadiazine, a commonly used antibacterial cream. In addition, a study of 80 people with psoriasis showed that a 70 percent aloe cream worked as well as a 0.1 percent triamcinolone cream, often prescribed for psoriasis.

So-called aloe juice is made from aloe gel. The gel—either fresh or dried and powdered—is just one ingredient in aloe juice products. Marketed as aloe juice, these products may also contain water, citric acid, fruit juices, preservatives, and more. Aloe gel is also an ingredient in many cosmetic products, including topical creams, lotions, and shampoos.

Aloe gel: Apply to the skin several times daily for burns and other skin conditions. For colitis, take 25 to 30 ml (about 2 tablespoons) twice daily; for diabetes, 10 to 20 ml (about 1 tablespoon) daily. Follow manufacturer’s guidelines.

Topically applied, aloe is safe. However, aloe may delay healing in deep, open wounds, as from surgery. Aloe gel should be free of anthraquinones and soothing to the gastrointestinal tract, but leaf extracts can contain all parts of the leaf, and thus both gel and latex. It is important to buy aloe gel that says it is made from the inner fillet and/or that is free of aloin. Aloe juice containing aloin can act as a laxative and can irritate the intestines. Prolonged use can lead to electrolyte loss and dependence on juice for normal bowel function. Those with acute or severe gastrointestinal symptoms should not take the juice. Children and pregnant or nursing women should not take aloe internally.
Posted by Tukang Warta
Share to: