One of Crocodile Facts that Shock You 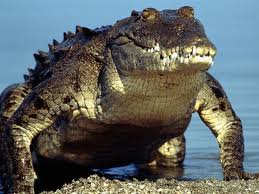 Crocodile Facts - There are many incidents reported where crocodile attack human and kill them. One of them is famous like Gustav; a crocodile beast that weighs is 2000 pounds and 20 feet long. This monster lives in the river of Burundi Africa.

On the other continent like Australia, both sea and river crocodile killed human as well and push authority to hunt them down. Yet in the movie, there are many movies that using crocodile as their monster.

Do you think this is scary enough for you? The fact is not.

In 1945, crocodiles killed 980 Japanese soldiers (of 1,000 in totals) who entered a mangrove swamp to escape the British navy. Only 20 soldiers alive! Can you imagine how scary that situation is? That is one of crocodile facts that make you shock.
Posted by Tukang Warta
Share to: