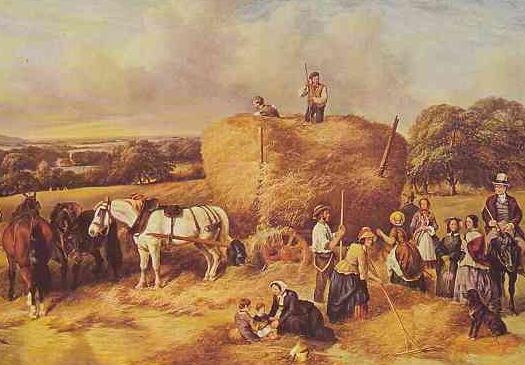 AROUND 11,000 B.C.E., human beings began to domesticate and cultivate plants. This new activity, which eventually changed populations, lifestyles, and the environment in profound ways, proceeded in sporadic bouts. Although the development of agriculture took place over millennia on different continents, its initial beginning is sometimes referred to as the Agricultural Revolution.

Archaeological evidence shows that men and women began cultivating grains between 12,000 B.C.E. and 10,000 B.C.E. in the Middle East. Sites in the ZAGROS MOUNTAINS of IRAN, TURKEY, SYRIA, and the Jordan River Valley, collectively known as the FERTILE CRESCENT, all indicate that cereal grains were first deliberately grown there by farmers. This region contains over 50 archaeological sites from 8,000 to 10,000 years old, all giving evidence that agriculture was practiced. Specifically, the earliest sites found are along the Levant Corridor, which runs south from the mid-Euphrates River valley to the lower Jordan River valley. The Natufian complex of the Levant provides archaeological evidence of farming villages that date from 10,500 B.C.E. While the cereal grains harvested there were still considered wild, they may have been planted intentionally, in plots cleared for the seeds. The Natufians, living in what is now northern ISRAEL and Jordan and southwest Syria, established permanent homes, stored food in stone jars, and used grindstones, mortars, and pestles to process grain.

Farming is more labor-intensive than hunting and gathering; the motivation for changing from one lifestyle to the other is not known. Climate changes and glacial retreats in the previous millennia may have led to increased yields of wild plants. Hunters and gatherers, noticing the increase, may have developed cutting tools and storage facilities to take advantage of the abundance of grain.

Other factors that may have prompted the switch to sedentary farming include the decline of at least one animal, the wild gazelle, which had been a significant food source in the Fertile Crescent. Research scientists have also put forth population expansion and the social pressure upon village leaders to provide feasts as possible explanations for the development of local agriculture.

The harvesting and selection methods of early gatherers, who eventually became farmers, changed growth patterns and made domesticated plants different from their wild varieties. Larger and sweeter fruits, peas, and legumes were eaten more often, and their seeds were the ones collected and germinated. In the case of wheat, only stalks on which the seeds stuck to the stalk were collected by people, and thus cultivated wheat came from these seeds and is easily identifiable. The stalks of wild wheat tend to break and scatter their seeds on the ground.

Archaeologists use radiocarbon dating on plant material; by plotting where the earliest domesticated plants are found, they can chart the spread of cultivation. As an example, remains of ancient, wild varieties of emmer wheat are found in Israel, Turkey, and Iran. Emmer wheat was the most common cultivated grain. The earliest example of domesticated emmer wheat was found in the Fertile Crescent area and dates from 8500 B.C.E. The earliest instances found of this crop in Europe date from 6800 B.C.E. in GREECE, then 6000 B.C.E. in GERMANY. Advances in radiocarbon dating over the last two decades have led to corrections in previously published dates and confusion in books.

Emmer wheat, einkorn wheat, and barley were domesticated by 8000 B.C.E. in the Levant, and within three centuries the people of this region were intentionally sowing all their wheat from stored seed. The wild variety of these three grains was no longer being consumed. Also by 8000 B.C.E., cereals were being introduced in areas where they had not previously grown wild, and farmers were selecting seeds for qualities that would increase crop yield.

From this area, agriculture spread both east and west. The similar climates and lack of insurmountable boundaries in those directions allowed this. Agriculture reached eastern Europe and EGYPT by 6000 B.C.E., and spread to western Europe, North Africa, INDIA and southern Asia by 3000 B.C.E. The sharing of new cultivation techniques to the north and south, however, was impeded by differences in weather such as extremes of cold and lack of sufficient rain. The eight major crops, called founder crops, developed in the Fertile Crescent during the Agricultural Revolution were emmer wheat, einkorn wheat, barley, lentils, peas, chickpeas, bitter vetch, and flax—which produces both oil and the fabric linen.

Rice and millet were cultivated in river valleys of CHINA, starting from 6500 to 5500 B.C.E. In the Americas, the earliest evidence of cultivation dates to 4000 B.C.E. and is found in the lowlands of northern South America. There is evidence of cultivation in New Guinea dating to 7000 B.C.E. Sub-Saharan Africa developed agriculture by 2000 B.C.E., as did some areas of eastern North America and Central America. In pointing to these independent developments, though, it is important to remember that the archaeological evidence is sparse, scattered, and often hit-and-miss. Important sites bearing new data may have been destroyed
over the years or have not been discovered.

Agriculture changed the landscape, wherever it was implemented. Fields, plowed and uprooted of their native, variegated plant species and forced to grow only one particular plant, became depleted of some nutrients and inhospitable to certain animals and insects that lived there in the past. Other animals that could live on the cultivated plants were therefore favored and become more numerous.

Before men and women farmed, they had to travel from place to place, and from season to season, finding their food where it grew wild. People did this for thousands of years. Being able to control food production, and to store or sell excess crops, meant that families had to stay with their fields and land. They built permanent homes and storage facilities. Villages grew, and over many generations, the specialization of labor developed. Those who farmed could sell food to those who performed other tasks: the stonemasons, carpenters, weavers of cloth, and so on.

Since excess food, cleverly traded, could lead to wealth and power, a stratified political and economic class rose, probably over generations—perhaps even over centuries. Food and wealth had to be protected, so means to ensure social control became part of life. Large communities of people meant strength in numbers and led to military conquests and aggression. The famous, protective walls of Jericho, where wheat, barley, and figs were cultivated, were constructed around 8000 B.C.E.

There were clear disadvantages and threats inherent in the agrarian lifestyle. Larger and larger communities became dependent upon fewer varieties of food and vulnerable to shortages caused by droughts or variations in weather, as well as pests and diseases. Famine and starvation were constant threats. Also, populations grew more rapidly when they became settled and permanent. Mothers in hunter-gatherer groups limited births because the group needed to be mobile to survive; too many infants to carry would slow it down. In a farming society, however, mothers tended to have more babies, closely spaced. Because
surplus food facilitates population growth, more and more food needed to be grown. These are problems that continue to affect all areas of the world.