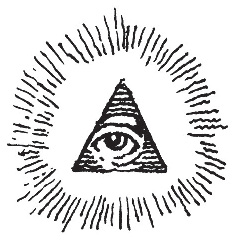 Probably the best-known use of the All Seeing Eye symbol is as a part of the design of the Great Seal of the United States of America, which appears on the US dollar bill. Set within a triangle, a single eye is surrounded by rays of light; on the Seal, the whole rests on top of an unfinished pyramid.

There is something quite sinister about this disembodied, ever-watchful eye, although its symbolic meaning is simple; it represents God watching over humankind, and is also known as the Eye of Providence.

The eye itself is a powerful and popular symbol, and the All Seeing Eye has its roots in the Egyptian Eye of Horus. The addition of the triangle represents all the different aspects of the shape, including the Christian Trinity of the Father, Son, and Holy Ghost.

The fact that the Great Seal was a symbol that belonged to Freemasonry and alchemy prior to its adoption as part of the Great Seal of the USA has given rise to many conspiracy theories. That the All Seeing Eye is also the symbol of the Illuminati, a secretive organization within the Catholic Church, has further bolstered these theories.

In Freemasonry, God is known as the Architect of the Universe. The first reference to the All Seeing Eye as a Masonic symbol appeared in 1797, although the Great Seal was designed in 1776 and first used in 1782. It is whispered that Masonic influences must have been at work when the Seal was designed; no one will ever know for sure, although those magical symbols that encrust the Seal must have been put there for a reason. What is certain is that when the Eye was adopted as part of the design of the Dollar in 1935, it was as a direct result of the influence of the President, Franklin Roosevelt, who had no reason to conceal his Masonic affiliations.