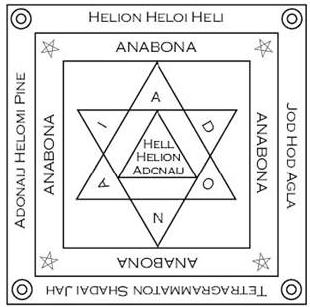 This is a particular kind of magical amulet, made of wax so that the secret names of demons can be written or engraved upon it. The whole is then melted so that its creator need never reveal the secret. The color of the almadel should correspond to its magical intention.

The root of the word “Altar” means “high” or “high place,” and therefore the altar is symbolic of the Holy Mountain, given that it is raised above its immediate surroundings and is used as a focus for holy rites and sacred practices. Altars, as such, exist in all religions and cultures, the symbolic meaning remaining unchanged across diverse belief systems. Altars certainly provide the main focus within churches, but they are not confined to large public buildings; many faiths have a small domestic altar in the home. 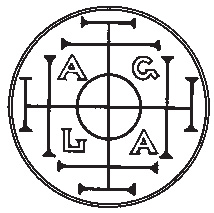 Although it is worn on the body as a piece of jewelry, the amulet is different from “normal” jewelry in that it holds a magical significance that is peculiar to its owner or wearer. Generally, the powers of the amulet fall into two specific categories, either to bring luck or to avert evil; either of these qualities arguably reflect a positive or negative attitude on the part of the owner. The talisman is effectively the same thing as an amulet although its name derives from an Arabic word meaning “magic picture.” Therefore a charm made specifically and inscribed with the names of the spirits, the Seal of Solomon, and other mystical symbols is more likely to be referred to as a talisman.

Significant symbols for use as amulets include birthstones (or other gems according to their magical powers), astrological signs, specific symbols such as the Hand of Fatima or the cornus, and symbols specific to the religious and spiritual beliefs of the wearer, such as the cross, the star, words, names, and numbers.
Incidentally, both amulets and talismans are referred to as “charms;” the origin of this word has the same root as the Latin word for “song,” indicating the link between a magical sound and a magical intention.

Essentially the tau cross surmounted by a loop or circle, the ankh is a prominent feature of Ancient Egyptian reliefs, artworks, and funerary paraphernalia. Like the tau, the ankh is a letter; specifically, it is a hieroglyph meaning “life.”

The volume of meaning that can be squeezed from such a simple symbol is awe-inspiring. The ankh represents the male and female genitalia, the Sun coming over the horizon, and the union of Heaven and Earth. This association with the Sun means that the ankh is traditionally drawn in gold—the color of the Sun—and never in silver, which relates to the Moon.

Putting aside the complexities of these separate elements, though, what does the ankh look like? Its resemblance to a key gives a clue to another meaning of this magical symbol. The Egyptians believed that the Afterlife was as meaningful as the present one, and the ankh provided the key to the gates of death and what lay beyond.

Powerful symbols frequently stray across into other cultures despite their origins, and the ankh is no exception. Because it symbolizes immortality and the Universe, it was initially borrowed by the fourth-century Coptic Christians who used it as a symbol to reinforce Christ’s message that there is life after death. The ankh is used by the Rosicrucians too. Even though its actual invention is shrouded in thousands of years of mystery, the ankh symbol can be bought in any high street jewelry store anywhere in the world. When Elvis Presley was criticized for wearing the “pagan” ankh among his many other crosses, he commented, “I don’t want to miss out on Heaven because of a technicality.”