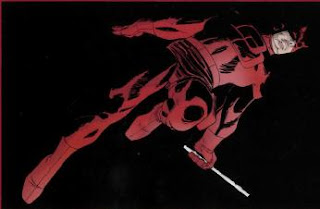 Their paths cross often. J. Jonah Jameson is the editorial voice of the city, and the Kingpin’s influence is felt from Gracie Mansion down to Hell’s Kitchen. Stan lee’s New York, the New York of Spider—Man and Daredevil, is as powerful a fictional portrait of the city as the New Yorks of John Cheever, Torn Wolfe and F. Scott Fitzgerald. It’s the biggest city around, and the most cynical and paranoid — perfect for a couple of non-conformist antiheroes.

A lot of this sounds familiar, like old Detective comics stuff There’s some Batman in Daredevil; the difference that matters is that Batman was created with limited powers, but initially no weaknesses. He is one of the worlds wealthiest men. Mart Murdock was first a struggling college student, then a successful but not terribly wealthy lawyer, and blind. Batman had to have his weaknesses created after the fact; Daredevil had them as original equipment. DC had to play catch—up with its characters to get them to where Marvel had Matt Murdock all along.

Daredevil’s flown under the radar for much of his existence. While Marvel’s big-name comics — Spider-Man. the X-Men, the Fantastic Four, the Hulk — drew the crowds and spun off the underwear deals, Double-D simply trucked along delivering tough, taut story lines illustrated with appropriately angular art. Read a decade’s worth of Daredevil comics, and their internal consistency amazes you. Beyond the flat-out ingenuity it takes to make a blind super hero believable — not to mention keep him alive — Daredevil’s New York moves along at the pace of life. Foggy Nelson gets elected DA and eventually names Matt his special assistant. Matt’s relationship with Karen Page blows hotter and colder than a hotel air conditioner. People within Daredevil’s sphere keep discovering his identity — which is gonna happen when you’re a city-bound super hero who has friends with brains. 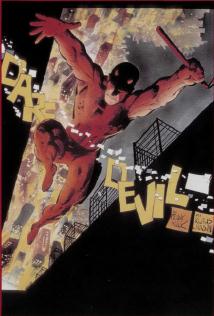 Even when Daredevil has stepped to the fore, it’s been retroactive. Frank Miller rook over with #158 and stayed for 34 issues, taking the title even deeper into noir-land and bringing Daredevil huge critical acclaim. Eventually. Most of the appreciation for Miller’s work on Daredevil came after he left the comic to give a toughening-up treatment to Batman (The Dark Knight Returns.) and create the definitive Elektra series, Elektra: Assassin (more on that later). The great work being done by today’s Daredevil writers starts here. So do 100 other rough-’n’-gritty super-hero comics. prank Miller’s run on Daredevil is more than just a redefinition of a classic character; it’s a turning point in comics history.

Daredevil has supplied other memorable moments, none punchier than the "outing" of Matt Murdock as Daredevil in a recent Bendis story arc. The comic makes you slap your forehead and say, Secret identities? in this day and age? Geez! This stuff should be happening all the time!” It’s biting-the hand—that-feeds-you work of the most ingenious kind. And in Bendis’ hands, it works great.

Daredevil is a comic that flaunts its pulp roots the way a death-metal-head flaunts a lip ring. The challenge for Matt Murdock is staving alive from issue to issue in a city where he can tell everyone’s out to get him. The challenge for Daredevil’s creators is to devise ingenious ways to get him to the next issue in one piece, or in several attachable pieces, and to make it believable. It’s been 40 years, and everyone’s succeeded so far.

If only Matt Murdock could find a woman who couldn’t be shot out from under him. Actually there was one — a Greek diplomat’s daughter named Elektra Natchios. She couldn't be killed. They tried. She could kill, though. Could and did. Can and does.

This make you feel old: Elektra and Daredevil has been intertwined in comic-book history for almost a quarter-century. It was January 1981 when Frank Miller revealed Elektra as Matt Murdock's first true love - a beautiful, exciting, pitiless woman that Foggy Nelson and Stick immediately labeled as pure danger, a stacked, black-haired vial of blow fish toxin. Trained in the ninja arts and transformed into a killing machine for hire to anyone for the right price, Elektra became Daredevil's occasional foe, a sometime torchbearer, and one of the few Murdock girlfriends who didn't die and stay dead.

The language of the previous paragraph is necessary because Elektra was killed once, by the hired killer Bullseye, and then brought back to life by the shadowy ninja organization called the Hand, to kill again. She has the wounds to prove it, and doesn't mind showing them off. That's just the kind of girl she is.

Elektra is the yin to Matt Murdock's yang. Murdock is 100 percent conscience; Elektra has no conscience. Elektra kills any and all for money; Murdock/Daredevil spare criminals from death. Elektra drifts with the wind; Murdock is firmly rooted in New York. Elektra is completely female; Murdock is totally male. Daredevil is old school; Elektra is new. They couldn't be more different. Maybe that's why their love runs so deep. 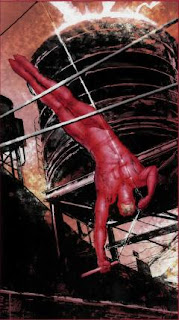 Forget Wonder Woman; Elektra is the root from which 90 percent of the current crop of stacked-lay-super-hero comics - Avengelyne, Whitchblade, Fathom, et al. - has sprung. Credit her run in Daredevil for that, but also send extra props to Frank Miller for spinning her off as a standalone. At a time when comic-book characters from the early '80s just weren't being spun off into their own series', Miller artist Bill Sienkiewicz delivered Elektra: Assassin, eight issues of fever dream blood and guts that still throw a wicked left hook. This is some serious noir, folks, with Miller's zip-gun writing and Sienkiewicz's wacked palette playing off each other like Charlie Parker playing off Miles Davis. It's seminal work - and while the possibility exists that someone may come along and create a better  book by playing off the one that started it all, the original riffs are still the freshest. Who's going to come along that can do a better job with film-noir looks and potboiler plots than Frank Mimller and Bill Sienkiewicz?

Miller wasn’t done with Elektra after Assassin. She returned in a graphic-novel collaboration with Lynn Varley called Elektra Lives Again. It’s great, dark stuff not the sort of book you want to be reading if you need your faith in humanity restored. But plenty of other books do that.

Elektra is not the most complex character out there, especially compared to the mentor and first love. She's ruthless and single-minded. Events play out around her while she moves inexorably to her target. She's darn easy on the eyes, sough, and the current Elektra title does as well as can be expected creating continuity for a character whose life is best viewed as a series of one-shots - to the jugular, the aorta, the femoral, the spinal column...