Ant-Man, Make the World a Safer Place for His Daughter

Unable to provide for his daughter through conventional means, Scott Lang turned his talents to burglary. After being arrested, the electronics expert furthered his studies in prison. Following and early release for good behavior, Lang went to work in the design department at Stark International, the corporation owned by Iron Man's alter ego Tony Stark.

A model employee, Lang impressed Stark with his schematics for advanced security systems. But while work was important, Lang's daughter Cassie was his life - and his world crumbled when she was diagnosed with an inoperable heart condition. Cassie's health continued to deteriorate, and even salary increases from Stark International couldn't stem the ride of medical bills. Almost without conscious thought, Lang began to case certain wealthy neighborhoods - reluctant to return to his criminal ways, but seeing few other options.

Cassie's only hope was surgeon Erica Sondheim, who had pioneered advanced techniques in critical-focus laser surgery. But when Lang visited the Sondheim Institute, he witnessed the doctor's abduction by Darren Agonistes Cross, president of the multinational conglomerate Cross Technological Enterprises. The ailing industrialist required Sondheim's expertise to correct his own heart condition, and was unwilling to wait in line for her specialized services. Leery of the Law, Lang planned to hire sufficient muscle to force his way into the Cross compound and rescue the doctor.

Desperate for the cash needed to finance such an endeavor, he returned to one of the houses he'd cased, where he had noted and array of extremely sophisticated detection devices and assumed they were protecting valuable goods. In reality, Lang had stumbled upon the home of Hank Pym. Inside, he discovered the super hero scientist's original Ant-Man costume, along with several canisters of shrinking gas. Intending to free Sondheim by himself, Lang stole the equipment. 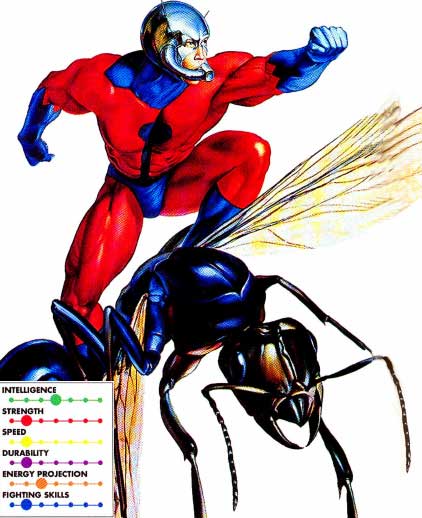 Pym observed the theft, but chose not to reveal himself. Instead, he followed Lang to his destination Yellow-jacket, curios to ascertain Lang's intentions. Garbed as Ant-Man, Lang rescued Sondheim, who later operated successfully on his daughter. He planned to return the Ant-Man outfit to its owner, but Pym let Lang keep the costume - provided he put it to lawful use.

As ant-Man, Lang assisted Iron Man and others, always willing to shrink to the occasion when duty calls. When Mr. Fantastic was believed dead, Lang worked with the Fantastic Four for a short period. a Fount of intellect and invention, he served as a valued atand-in for the elastic inventor, and has since returned to aid the team as needed. for years, Lang considered himself a part-timer crime fighter. Now a member of the Avengers, he strives to make the world a safer place for his daughter - and seeks to rise above his reputation as a poor man's Hank Pym.