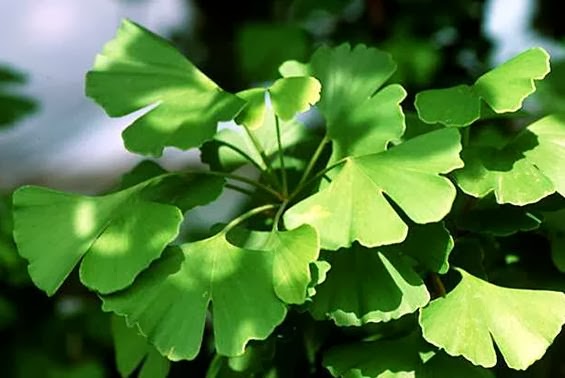 In rock layers some 270 million years old, scientists have unearthed fossils of ancient trees with delicately veined, fan-shaped leaves that are deeply notched to form two halves, or lobes. Some of these fossils are essentially identical to the leaves of a living tree known as Ginkgo biloba. It is the only surviving member of the Ginkgo genus, a sort of living fossil that survived into modern times in a remote corner of southeastern China. Buddhist monks began cultivating ginkgo there in the 11th century, when ginkgo was revered as a sacred plant and grown for its peculiar fleshy seeds.

The Chinese called these seeds yinxing, meaning “silver apricot.” In Japan, where ginkgo was introduced, yin-hsing is thought to have become corrupted into gingkyo. Ginkgo leaves and seeds have been used in traditional Chinese medicine since the 15th century and probably were used much earlier in folk medicine.

Perhaps our oldest known tree, ginkgo and its leaves have been an herbal remedy for many centuries. Ginkgo contains potent antioxidants called glycosides, which protect nerve cells, and terpene lactones, which reduce inflammation. Ginkgo is used for poor circulation and for reducing the pain of peripheral vascular disease. However, studies investigating these effects show only modest benefit over placebo.

Ginkgo is widely used in Europe, Canada, Australia, and the United States for the prevention and treatment of dementia. A number of studies have shown that Ginkgo biloba extract (GBE) improves symptoms and stabilizes or slows progression of dementia, including Alzheimer’s disease. Studies also show that these extracts modestly improve age-related memory impairment (which is much less serious than dementia).

Newer studies published in the U.S. have not been as encouraging. A study published in the journal Neurology in 2008 did not show that GBE prevented cognitive decline in elderly people with normal cognitive function. However, among the people who actually took ginkgo as directed, memory loss was slowed. A much larger study published in the Journal of the American Medical Association in 2008 also failed to demonstrate that taking GBE (120 mg twice a day) prevented dementia in
Posted by Tukang Warta
Share to: