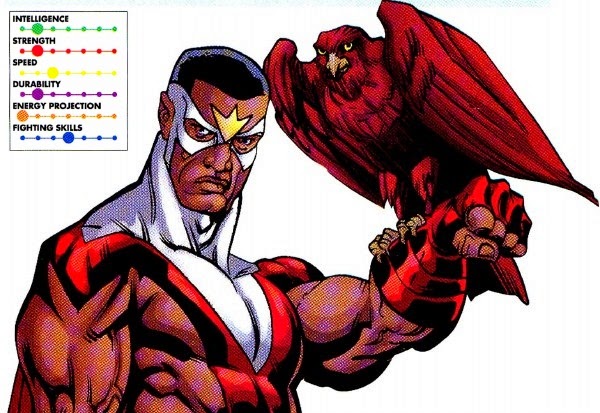 articlemostwanted - When his parents were murdered, upstanding community volunteer Sam Wilson gave in to his grief and anger. Severely depressed, his personality shifted, and he became a self-serving racketeer.

On a mob assignment involving the minions of the Red Skull, Wilson recognized the error of his ways and reclaimed his lost idealism, Wilson joined with Captain America to driest the Skull’s forces.

Recognizing the Falcon’s potential. Cap took him under his wing and Wilson eventually became the legendary adventurers paltrier. He also established himself as a hero of the people—always accompanied by his per falcon Redwing.

Early in the Falcon’s career, the Black Panther presented the novice hero with a new Costume and jet-powered wings based on Wakandan technology. Shortly thereafter, the Falcon joined the Avengers. But resented the fact that he was made a member merely because he fulfilled a government-mandated minority quota. The Falcon left the Avengers for a time, preferring to work only with Cap.

Motivated by a strong desire for ordinary people to help themselves and one another, the Falcon sees himself as an enabler rather than a costumed icon, Armed with a strong sense of community, he believes being a hero starts at home, and so remains close to Harlem. There, he can act as both a role model and protector of the people.

The Falcon devotes nearly as much time to his work out of costume as he does to his super hero activities. Shuttling between his job as an urban planner in New York City and active membership in the Avengers, the Falcon focuses his efforts on making a positive difference in the world.