Vision - The One Who Fights His Creator - Voltron 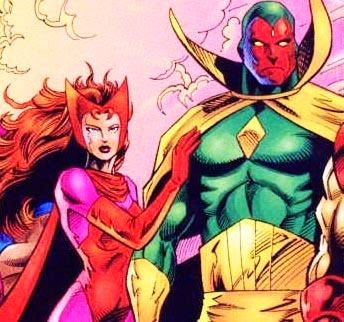 articlemostwanted - Assembled at the instruction of Ultron, the Vision is an android who imitates virtually every natural function of a person, all aspects of human being including independent thought. Seeking revenge against the Avengers, Ultron made and programmed the Vision’s neural processors with brain patterns of Wonder Man, and put inside special synthesized cells allowed him to alter his mass and solidity. Ultron then released the Vision to draw the Avengers into a deadly trap. Moved by the team’s plight, the Vision overrode his mission variables and helped the heroes defeat the one who made him.

Rather than creating a cold, calculating automation, Ultron had given birth to a life form longing for sentience. The Vision served the Avengers faithfully for years, all the while seeking to transcend his original programming as a vehicle of vengeance and become fully “human.” When he embarked on a romantic relationship with the Scarlet Witch, the Vision at first denied to himself that an android could have feelings of love for another being. Eventually, however, their courtship blossomed into true love and marriage.

When a malfunctioning control crystal implanted in the Vision’s cerebral circuitry by Ultron interfered with the android’s ability to reason, he sought to solve the planet’s problems by seizing control of the world’s governments, businesses and armed forces. After taking charge of the United States’ nuclear arsenal and defense systems, the Vision was convinced he should abandon his grand scheme by his fellow Avengers. Fighting a war with himself, he severed his connection to the planet’s databanks.

Vision II (White Body)In the wake of the android’s meltdown, the nations of Earth came to regard the Vision as a high-level security threat. Ultimately, government operatives abducted and dismantled the android, erasing his memory. The Scarlet Witch and the Avengers eventually recovered their teammates’ components, and Hank Pym rebuilt and reprogrammed the Vision. But the synthesis returned to existence sans human emotion, unable even to recall his love for the Scarlet Witch.

The Vision had since uploaded a new set of brain patterns, again acquiring the ability to feel. Eager to experience emotion to the fullest, the synthesis had made diligent efforts to explore aspects of his personality aside from those preprogrammed by Pym, inching ever closer to the humanity he had sought with limited success his entire existence.

The control of the Vision's body was taken over by the reality-altering Scarlet Witch, who suffered from a nervous breakdown. She created five Ultron robots, partly from the Vision's body, decaying him in the process. The remains of his body were later sent to Stark Enterprises.