Broomstick Symbol - Is It only for Witches? 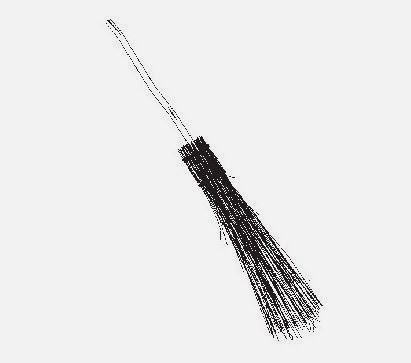 articlemostwanted - The hard and polished elm wood that is traditionally believed to make the handle of the witch’s broomstick would help to make it more aerodynamic. Most of the people of the world knew that this image is broomstick that always used by witches.

The broomstick, at first, appears to be a simple piece of household equipment. Its form may have changed over the centuries from the traditional dried branch of the broom plant (hence the name) but its use seems to have remained unchanged. However, there’s far more to it than that. The very act of sweeping was a sacred task in temples, since to be able to clean something properly the person doing the cleaning must himself be both clean and pure.

As well as sweeping away dust and dirt, symbolically the besom or broomstick sweeps away other things too; in parts of France, for example, it’s considered bad form to sweep up after dark in case good luck is swept away with the dirt. In Ancient Rome special broomsticks were used by sacred “midwives” or wise women to symbolically sweep away any negative influences from a house in which a baby had just been born. These broom-wielding midwives are the precursor to the witch that popularly flies about on a broomstick, which has to be the ultimate carbon-neutral vehicle.

The broomstick of the female witch a very handy object to have around. It is often seen as a phallic symbol, and in pre-Christian societies marriages were often validated by the happy couple leaping together, hand in hand, over the broomstick. It is also a symbol of the liberation of the woman away from domestic drudgery; with her magical broomstick, the witch can fly anywhere, wield her power, and disclose her true identity.

Incidentally, the broomstick is sometimes called a “besom;” this word originates from the old English besema, meaning “woman,” and has the same root as the word “bosom.”
Posted by Tukang Warta
Share to: