articlemostwanted - An important ritual object for Native Americans, Eskimos, Africans, and the Australian Aborigines, for whom the object is associated with the Churinga.

The Bull Roarer is a long, narrow piece of wood with tapering ends that, when attached to a cord and whirled around the head, produces a sound very much like thunder or the bellowing of a bull. It was taboo for woman to see this sacred object, which was used in initiation ceremonies and was regarded as carrying the actual voices of the Spirits.

The Bull Roarer was thought to make men invincible and indeed the noise it produces is quite terrifying, especially if it is not expected. It was also used in fertility rites and as a way of calling for rain. 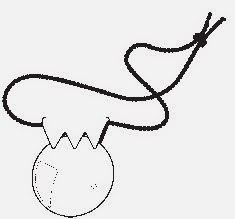 This is a special charm or amulet that was given to Roman children when they were born. A sealed locket, the bulla (meaning “bubble” or “knob”) contained magical spells specific to the child in question, such as symbols of protection, or wishes for wealth. The bulla was constructed of different materials depending on the wealth of the family, leather for the poorest families and gold or other precious metals for the wealthiest.

Roman boys put aside their bullae when they reached puberty, and the object was offered to the Gods. Girls wore theirs until the eve of their wedding. In either case it was considered that the bulla belonged to the child, as part and parcel of their personality.

The bulla is the origin of the name of the Papal Bull, the special edict that hails from the Vatican, which is fastened with an oval seal of the same shape as the bulla.

A rod, staff, or wand generally surmounted with wings. Two serpents entwine about the staff, forming a figure-of-eight shape. The key elements of the construction of this ancient sign are the serpent, the spiral, the infinity sign, the circle, wings, and the wand.

The Caduceus is an extremely ancient symbol, and its earliest recorded appearance is on the goblet of the King of Lagash, dating back some 2600 years BC.

The Caduceus is the emblem of Mercury/Hermes and is incredibly rich in meanings: first, the staff or wand is a symbol of power and authority, of magical and supernatural forces, and is the tool of all magicians, medicine men, and shamans. It also represents the Tree of Life or World Axis. Then there are the wings on top of the wand.

Wings signify flight (both physical and metaphorical), intuition, the spiritual, and communication from the Heavens or the Gods. Mercury is the Messenger of the Gods. The two serpents, twining in opposite directions, represent opposition and equilibrium. They also signify opposites—male and female, day and night, good and evil, and so represent balance. Serpents also remind us of hidden knowledge.

As the serpents scroll around the wand, they form the figure-of-eight shape, or infinity symbol, which stands for completeness and perfection.

Part of the infinity symbol is the circle, ultimately representing the cosmos, the spirit, and unity.

All these elements combined make for a powerful symbol that has altered very little over the millennia. Together, they add up to supernatural power and hidden wisdom, messages from the spiritual realms, authority, the cosmos and infinity, and the pairing of opposites in harmony and unity.

Perhaps the most common use of the Caduceus, both today and since its earliest appearance, is as a symbol of healing and medicine. Aesclepius, the first physician and the God of medicine, had the Caduceus as one of his attributes because he had the power and the intuition (the wand and the wings) to be able to use potentially poisonous or corruptive substances (the serpents) to restore health and, reputedly, to bring the dead back to life.

The Caduceus was not only the instrument of Aesclepius, but of the healing God Ningishzida of Mesopotamia (whose symbol is intertwining snakes), and of the Egyptians Ba’al, Isis and Ishtar. It is also found in India where it carries the same meaning.
Posted by Tukang Warta
Share to: