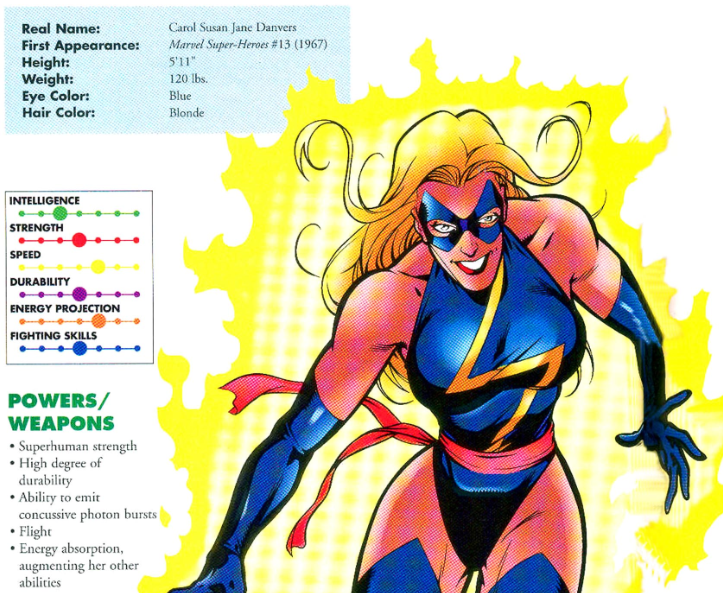 articlemostwanted - Always a risk-taker, Carol Danvers entered the Air Force at an early age due in part to her love of airplanes—but mostly because her father didn’t believe girls should go to college. Driven to succeed in a man’s world, she rose rapidly through the ranks to become one of the leading agents in military intelligence. Subsequently, Carol became NASA’s youngest-ever security chief at Cape Canaveral—the first woman to hold the position. In that capacity, Carol encountered the original Captain Marvel—and became embroiled in his struggle to save Earth from his own people, the Kree.

During a battle between Captain Marvel and an alien foe, Carol was accidentally irradiated by the unknown energies of a Kree device that augmented her genetic structure. Becoming a Kree-human hybrid, she was granted superhuman strength and speed, the power of Bight, a clairvoyant “seventh sense,” and all the fighting skills of a Kree warrior. A victim of circumstance, Carol made the most of her newfound abilities. She swiftly established herself as a champion of Earth and often fought alongside the Avengers.

Carol’s life of adventure came crashing down when she was stripped of her very identity by Rogue, then working in collusion with the Brotherhood of Evil Mutants. Along with her memories, Carol lost virtually all of her superhuman abilities. Later subjected to an alien evolutionary ray that triggered the latent potential of her augmented genes, she acquired an array of cosmic powers fueled by the energy of a white hole. Although Professor X restored her memories, Carol no longer possessed strong emotional tics to people and places of her past. A stranger in her own skin, she fled the planet and her problems for the promise of a fresh start among the stars.

Carol returned to Earth some years later. As Warbird, she eventually rejoined the Avengers—but by then, her cosmic powers had faded to a fraction of what they once were. A shadow of her former self, Carol sought solace at the bottom of a bottle. The former shooting star of the super hero set had flamed out. Hitting rock bottom, she quit the team following a formal court marshal for conduct unbecoming an Avenger.

Carol eventually made peace with her rocky past and learned to stand on her own two feet, returning to action as an Avenger. Taking responsibility for her actions, she has overcome emotional emptiness, alcoholism, substantially reduced power levels and failure in the eyes of her teammates to prove herself as an asset to the Avengers. Uncompromising and tempestuous, Carol is a warrior by nature, driven by a fighting spirit that refuses to quit. She struggles still with her inner demons, but defies her own weaknesses daily in the face of overwhelming odds.