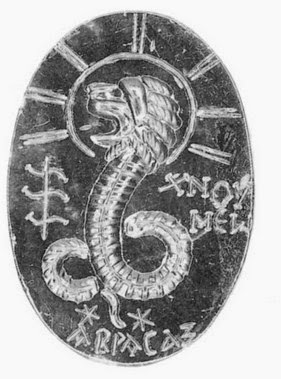 The Chnoubis is a hybrid creature, with the head of a lion and the tail of a serpent. It was carved onto

stones for use as an amulet, providing protection against poisons in particular. Amulets featuring the Chnoubis date back to the first century and it is supposed that this odd-looking creature may be related to Abraxas, whose image was used in a similar way. 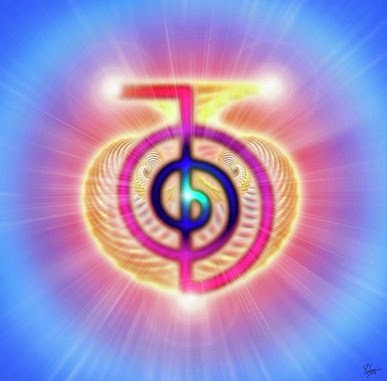 A symbol of Reiki healers, the Choku Rei is comprised of a spiral that culminates in a hooked stick. It looks a little like the treble clef used in musical notation. The symbol is used by Reiki healers to increase the power available to them, and to help focus this energy. The meaning of Choku Rei is “place the power of the Universe here.” Healers draw the sign mentally in the air as a form of meditation, generally before and after giving a treatment.

A cicatrix is a scar, but not just any scar. It refers to a very specific incision that is scored onto the body and carries secret symbols pertaining to the person’s religious or magical beliefs. A very painful process called scarification leaves these raised marks on the skin. Until the end of the nineteenth century, Maori men had ritual scarring all over their faces in order that they might look more frightening to the enemy. A cicatrix acts as a permanent amulet that is an inherent part of the person. Its purpose is similar to that of the tattoo; the pain involved in the process is an important rite of passage. Ritual scarring is popular among dark-skinned people because a tattoo is not particularly visible against the skin. 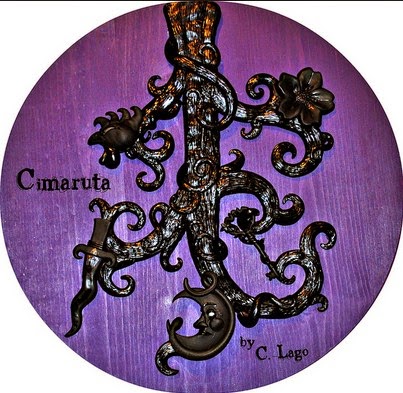 In Italian, this means the “sprig of rue.” It is an amulet, made of silver in honor of female energy in the form of the Goddess, comprising a

model of a sprig of rue with various charms in its three branches. The Cimaruta is a very old charm, which evolved from an Etruscan magical amulet. It dates back as far as 4500 BC, although there are more contemporary versions such as the stylized one illustrated here. The charms featured generally include a crescent Moon, a key, stars, daggers, and flowers; different regions of Italy produced their own specific symbols. Also known as the Witch Charm, the Cimaruta is favored by witches, and to see one in someone’s home might indicate the spiritual persuasion of the owner. It is worn either as a pendant or might be hung over a doorway, a possible reason for the Cimaruta being double-sided. When used in this way as an ornament the Cimaruta is usually quite large in size.

The three silver branches of the Cimaruta relate to the notion of the Triple Goddess. The charm itself takes on all the significance of the rue plant as being both protective and a tool of witches, used to cast spells and throw hexes.
Posted by Tukang Warta
Share to: