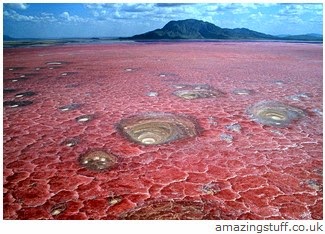 articlemostwanted - Lake Natron in Tanzania could be the most serene lakes in world. It's also the place of many phantasmagorical photographs ever captured, photographer Nick Brandt finds frightening scene. There, there are many species of birds and bats were quiet, stiff, fossilized, after exposure to the deadly waters of the lake.

"Nobody knows for sure how these animals die, but it looks like the reflection of the extreme surface of the lake makes them confused and make them plunged into the lake," said Brandt in his picture book Across the ravaged Land.

"The water of the lake contains soda and salt levels that are very high. So high that it can destroy the Kodak film ink box belong to me in a few seconds. A mixture of soda and salt causes living beings calcify, perfectly preserved so they dry."

Lake Natron is inhospitable to life. It only used as a breeding area endangered Lesser Flamingo, and is home to several types of algae and bacteria.
The color of the lake is red that come from bacteria that live in the lake. Salty lake is steaming hot, with temperatures can reach to 140 degrees Fahrenheit (60 degrees Celsius), according to New Scientist.

Brandt are photographing animals calcify in 2010 and 2012. He was so amazed with the preservation process. Every detail recorded properly. "Until the tip of the bat’s tongue is still preserved," he told The Huffington Post in an email.

The animals were so hard as a rock so that Brandt could put them in a place they usually live. So, the photos here is set up such that the animals are like to live back in the real world. It could be said zombie life.

These are some shots from Brandt:

source: intisari-online
by: n3m0
Posted by Tukang Warta
Share to: