A Father in India Marries His Daughter with a Wooden Statue 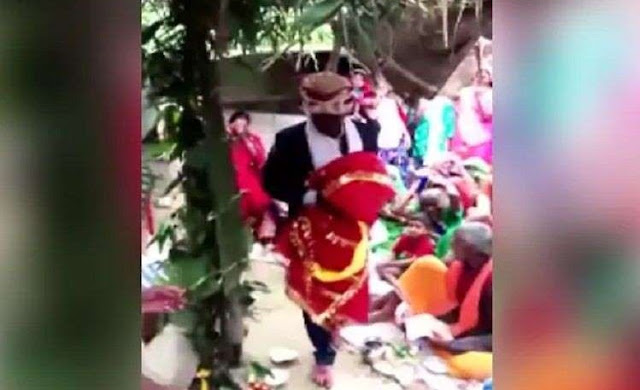 amw - A father in Uttar Pradesh, India, became a public conversation. The reason, he married his daughter with a wooden statue.

This unique event was reported to have taken place in Ghurpur, where the "marriage" used rituals as is commonly used.

Reported by NDTV on Friday (6/19/2020), her father, Shiv Mohan revealed the reason why he decided to marry his daughter to a wooden statue.

90-year-old Mohan said he had nine children, with eight of them known to have been married.

"The youngest has no possessions, nor is she smart. So I decided to marry her off with a wooden statue," he explained.

The Indian news agency ANI reported that the marriage of the youngest child to the statue was said to be his father's last request.

The "bride" is dressed with silk, flowers, with a wedding ritual that should be held for a human couple in the wedding.

Among other things are jai mala or exchanging bouquets of flowers, and pheras, or walking around the fire seven times. Priests were also brought in to legalize it.

It was said that Mohan wanted all his children to be married before he died. While the youngest child does not have a candidate yet.

Relatives and local priests then stated, his youngest child could still be married to his partner represented by a statue.

The proposal was approved, so that the "happy moment" was held. Several relatives were reported to have attended the ceremony.