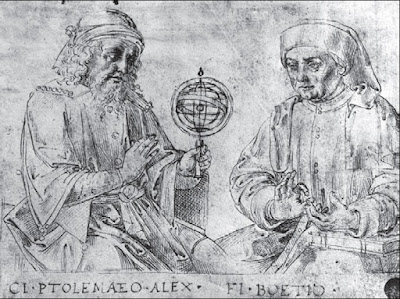 amw - Ptolemy (Latin: Claudius Ptolemaeus) was originally come from Egypt and known as astronomer, mathematician, and geographer of Greek descent who is famous in Alexandria at the 2nd century CE long time ago.

In some points his writings represent the culminating achievement of Greco-Roman science, particularly his geocentric (Earth-centred) model of the universe now known as the Ptolemaic system.

The truth is no one know how Ptolemy’s life except what we can get from his works. His first biggest astronomical writing, the Almagest, was created about 150 CE and it has reports of astronomical observations that Ptolemy had made over the preceding quarter of a century. The size and content of his subsequent literary production suggests that he lived until about 170 CE.

The book that is now generally known as the Almagest (from a hybrid of Arabic and Greek, “the greatest”) was called by Ptolemy Hē mathēmatikē syntaxis (The Mathematical Collection) because he believed that its subject, the motions of the heavenly bodies, could be explained in mathematical terms. The opening chapters present empirical arguments for the basic cosmological framework within which Ptolemy worked. Earth, he argued, is a stationary sphere at the centre of a vastly larger celestial sphere that revolves at a perfectly uniform rate around Earth, carrying with it the stars, planets, Sun, and Moon—thereby causing their daily risings and settings. Through the course of a year the Sun slowly traces out a great circle, known as the ecliptic, against the rotation of the celestial sphere. The Moon and planets similarly travel backward against the “fixed stars” found in the ecliptic. Hence, the planets were also known as “wandering stars.” The fundamental assumption of the Almagest is that the apparently irregular movements of the heavenly bodies are in reality combinations of regular, uniform, circular motions.

How much of the Almagest is original is difficult to determine because almost all of the preceding technical astronomical literature is now lost. Ptolemy credited Hipparchus (mid-2nd century BCE) with essential elements of his solar theory, as well as parts of his lunar theory, while denying that Hipparchus constructed planetary models. Ptolemy made only a few vague and disparaging remarks regarding theoretical work over the intervening three centuries; yet the study of the planets undoubtedly made great strides during that interval. Moreover, Ptolemy’s veracity, especially as an observer, has been controversial since the time of the astronomer Tycho Brahe (1546–1601). Brahe pointed out that solar observations Ptolemy claimed to have made in 141 BCE are definitely not genuine, and there are strong arguments for doubting that Ptolemy independently observed the more than 1,000 stars listed in his star catalog. What is not disputed, however, is the mastery of mathematical analysis that Ptolemy exhibited.

Ptolemy was preeminently responsible for the geocentric cosmology that prevailed in the Islamic world and in medieval Europe. This was not due to the Almagest so much as a later treatise, Hypotheseis tōn planōmenōn (Planetary Hypotheses). In this work he proposed what is now called the Ptolemaic system, a unified system in which each heavenly body is attached to its own sphere and the set of spheres nested so that it extends without gaps from the Earth to the celestial sphere. The numerical tables in the Almagest (which enabled planetary positions and other celestial phenomena to be calculated for arbitrary dates) had a profound influence on medieval astronomy, in part through a separate, revised version of the tables that Ptolemy published as Procheiroi kanones (Handy Tables). Ptolemy taught later astronomers how to use dated, quantitative observations to revise cosmological models.

Ptolemy also attempted to place astrology on a sound basis in Apotelesmatika (Astrological Influences), later known as the Tetrabiblos for its four volumes. He believed that astrology is a legitimate, though inexact, science that describes the physical effects of the heavens on terrestrial life. Ptolemy accepted the basic validity of the traditional astrological doctrines, but he revised the details to reconcile the practice with an Aristotelian conception of nature, matter, and change. Of Ptolemy’s writings, the Tetrabiblos is the most foreign to modern readers, who do not accept astral prognostication and a cosmology driven by the interplay of basic qualities such as hot, cold, wet, and dry.