What is Abyssal Plain 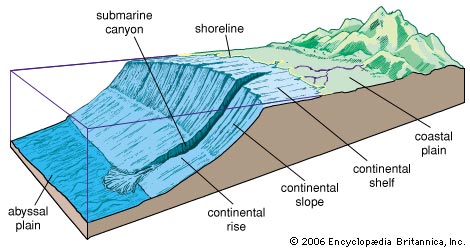 Located in the world’s oceans, an abyssal plain is a depositional surface on the seafloor. The plain is generally 13,000 to 20,000 ft (4,000 to 6,000 m), extending seaward from the base of a continental slope or from the seaward edge of an oceanic trench to the mid ocean ridge. The term plain implies that this part of the seafloor is a monotonous, uninteresting place.  Actually, the plain is remarkable for its sediments, manganese nodules, and life forms.

Much of the abyssal plain consists of tiny particles of brown and red clays, contributed to the ocean by wind deposition and volcanic eruptions. The shells of microscopic marine organisms also make up a significant portion of the sediments. Quiet waters of the deep ocean do not disturb the particles as they accumulate on the ocean floor. Marine scientists study the sediments to glean data about the age of the ocean floor and changes in the ocean’s depth, temperature, salinity, and circulation. This information provides clues to geographers and other scientists about millions of years of change in regional and global climate.

Turbidities are distinctive layers of sediments on the edges of abyssal plains next to continental slopes. Turbidities come from river sediment deposited on the outer edge of the continental shelf. Turbidity currents move the sediments from the shelf to the plain. The currents are slurries of water and suspended sediments. They rush down continental slopes similar to an avalanche, and the resulting turbidities form tongue like abyssal fans usually near the mouth of a river or submarine canyon.

Turbidities also spread farther out on the plain. They are less abundant in the pacific ocean than in the Atlantic and Indian oceans, because fewer large rivers supply sediments to the Pacific Ocean and its deep-sea trenches trap sediments, preventing their spread to the abyssal plain. Seamounts (submerged mountains) rarely interrupt the abyssal plains of the Atlantic and Indian oceans, as turbidities in these oceans bury most of the mountains. In contrast, many seamounts rise above the abyssal plains in the Pacific Ocean because of a paucity of turbidities there. 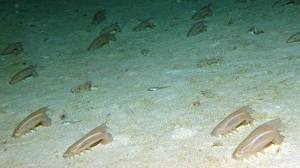 These mysterious, potato-size rocks litter the surface. They have thin concentric layers of metals such as iron, cobalt, copper, nickel, and manganese. Chemical reactions in the water add layers that are 0.4 to 8 in (10 to 200 mm) thick every million years. Scientists do not agree on how the nodules form. Some investigators feel that biological productivity in overlying waters control the accretion of metals. Others argue that the mid ocean ridge’s hydrothermal vents, which exhale such metals from the Earth’s interior, are responsible. The metals have aroused interest in the nodules’ economic value. Presently, the nodules are too expensive to mine because of the cost of extracting them from the ocean floor.

The abyssal plain environment is not conducive to life as we know it; it is perpetually dark and very cold, and the food supply is sparse. Moreover, hydrostatic pressure is enough to crush a person’s body to the size of a soccer ball. No plant life exists because of a lack of sunlight. The animals—primarily small worms, crustaceans, and mollusks—are scavengers. They live off bacteria on the seafloor and fecal pellets, bones, carcasses of large animals, and dissolved material that filters down the water column. Population densities are low owing to a harsh environment and scarcity of food.