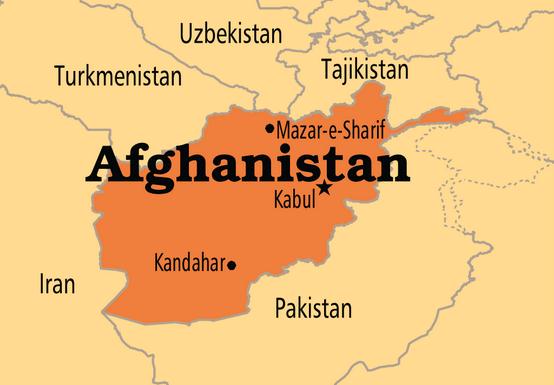 THE STATE OF AFGHANISTAN is a landlocked country that borders PAKISTAN to the south, IRAN to the west, TURKMENISTAN, UZBEKISTAN, and TAJIKISTAN to the north, and CHINA to the northeast. The country is divided into 32 provinces. Since the overthrow of the Taliban in 2001, Afghanistan is in the process of reconstructing its government.

Afghanistan, known since ancient times for its lapis mines, is divided by several mountain ranges. Cutting the country in half is the HINDU KUSH, from which smaller ranges project: from the Band-I-Turkestan on the west to the Suleiman Range to the east. To the southeast is the Dasht-I-Margo desert. Afghanistan has a dry climate with hot summers and cold winters. The country experiences sparse rainfall. Its chief rivers are the AMU DARYA, the Kabul, the Helmand, and the Hari Rud. Major cities include Kabul, Kandahar, Herat, Mazar e-Sharif, Jalalabad, and Konduz.

The region in and around Afghanistan has been inhabited since the Paleolithic and Neolithic eras. Afghanistan has been the scene of migrations throughout history. Since ancient times, Afghanistan captured the interest of foreign peoples. The region of what is now Afghanistan entered into recorded history under the PERSIAN EMPIRE. By 331 B.C.E., Alexander the Great extended his empire into Afghanistan after conquering Persia. Alexander’s empire disintegrated after his death in 323 B.C.E. with Afghanistan passing to Seleucis
Nikator, one of his generals. Afghanistan soon after came under the control of Chandragupta from INDIA. Around 650 C.E., ISLAM came to Afghanistan through Arabs who conquered the Sassanids in Persia. In 1219, the Mongols under Genghis Khan spread destruction throughout Afghanistan. For 500 years, Afghanistan was part of the power plays between the Mughals in India and the Safavids in Persia. In the 18th century, Afghanistan was united for the first time under Ahmed Shah Durrani, who created an empire that included modern-day Pakistan.

By the 19th century, Afghanistan was caught in the middle of the imperial ambitions of Britain, which had controlling interests in India and RUSSIA. Britain fought two wars to gain control of Afghanistan, both of which ended disastrously. In the 20th century, Afghanistan entered a period of modernization through King Amanullah between 1919 and 1929. In 1933, King Mohammad Zahir Shah extended the modernization through the creation of a constitution and a parliament. However, by the 1960s, the communists had gained a foothold in Afghan politics, and by 1973, Sardar Mohammad Daoud abolished the monarchy and established a republic with financial backing from the Soviet Union.

In 1979, the Soviet Union invaded Afghanistan to support a communist government under the Najibullah regime. Soviet occupation was met by fierce resistance by the Mujahideen, who were mainly supported by the United States. In 1989, the Soviets withdrew from Afghanistan, prompting civil war among the Mujahideen. By 1996, Afghanistan fell under the rule of the Taliban, a fanatical extremist Muslim sect. The Taliban imposed Sharia law as the legal system for Afghanistan and severely restricted women’s rights. Additionally, Afghanistan became a breeding ground for international terrorism, harboring Osama bin Laden, leader of the al Qaeda terrorist group that masterminded the attacks in New York City and Washington, D.C., on September 11, 2001.

In November of that year, the United States led a coalition of nations to overthrow the Taliban regime, when it would not surrender bin Laden. The Taliban offered no significant resistance and retreated to the mountains. At the end of 2001, an agreement was reached in Bonn, Germany, to lay out a blueprint for Afghanistan’s reconstruction.

Afghanistan has a diverse array of ethnic groups. The Pashtun are the majority ethnic group, followed by Tajiks, Uzbeks, Hazara, Aimaq, Turkmen, Baluch, and Nuristani. Pashto and Dari are the main languages spoken. Twenty years of war have left Afghanistan’s infrastructure in ruins. Agriculture makes up 60 percent of the economy. Afghanistan is one of the leading exporters of opium, which is most profitable for farmers to grow.