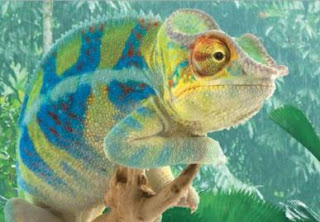 Almost every animal has a good reason to hide. Going undetected makes it easier to catch food — and easier to avoid becoming someone else’s. In any species, the individuals that stand out the most will be the first to be eaten and the last to catch their own dinner, and so natural selection picks the ones with the best camouflage.

There are several different kinds of camouflage. The most basic is to hide under a rock, or in sand or leaves. This is sometimes called ‘cry-psis’, and some animals will incorporate bits of their environment on their bodies to improve the effect. Three-toed sloths have algae growing in their fur, which gives them a dark green hue that helps them hide among the trees. Coral crabs deliberately attach young polyps to their shells so they resemble part of the reef.

The next step is to change your own body coloration. Mammals have a color pallet restricted to white, black, brown and yellow, but fish, amphibians, reptiles and birds can all produce a vivid array of greens and bright reds. Red might not seem like a great color for camouflage, but lots of seaweed and corals are red, and in fact many sea creatures obtain the red pigment for their bodies by eating the corals and seaweed that they hide among.

Camouflage is a show, performed for a few specific observers. Most mammals see in black and white, or only two colors. Primates see three primary colors, while birds see four. Insects can see well into the ultraviolet part of the spectrum and many snakes can sense infrared. Choosing the right camouflage is about exploiting the weaknesses in your target’s visual system. Even if your color is a very close match to your surroundings, your outline can still give you away. One of the earliest parts of the brain to evolve was concerned with recognizing the edges of things, and most animals still have a dedicated outline recognition brain region. Good camouflage uses contrasting patterns of light and dark, or different colors. These trick the outline recognition system so that it mentally carves up your shape into smaller, irregular blocks. In some environments, there is so little to hide behind that this ‘dazzle’ camouflage is all you have.

The Royal Navy used this technique in World War I,to make it hard to judge the speed and heading of battleships on the featureless ocean. But the orca, or killer whale, beat them to it by several million years. The bright patches of white on a black body disrupt its outline so that it is not immediately recognized as a threat. Zebras use the same technique, but this time the entire herd merges into one huge zebra that is much more intimidating and confusing to lions and cheetahs.

Sometimes, a purely visual camouflage isn’t enough. Procrypsis is the technique of camouflaging your movement. Predators are acutely sensitive to movement, but a typical forest is a whirl of activity and they must quickly tune out the background motions of wind, water and all the non-food animals if they are not to be overwhelmed. Chameleons, leaf insects and preying mantises can exploit this by moving with a rocking motion that mimics the swaying of branches in the wind. Some Pacific octopuses will curl up like a rock, but still manage to move along the seabed by synchronizing movement with the back-and-forth patterns of shadow cast by sunlight through the waves.

How the Cuttlefish Gets its Spots 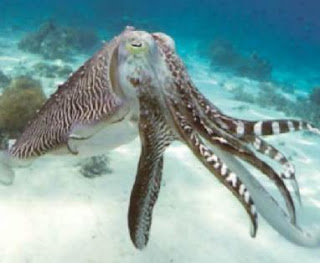 Cephalopods — particularly the octopus and the cuttlefish — are the undisputed masters ofthe quick change. Their skin is packed with specialised cells called ‘chromatophores’ that change the colour or reflectivity ofthe skin. Each chromatophore has its own activating muscle and nerve fibre, and these are connected to a part ofthe brain dedicated to coordinating the complex patterns. Although the chromatophores only contain red, yellow and brown pigments, cuttlefish can create almost any colour by combining different layers of coloured and reflecting cells. Green, for example, is achieved by using an iridescent layer deep in the skin to scatter light back through yellow pigments, which act as a filter. 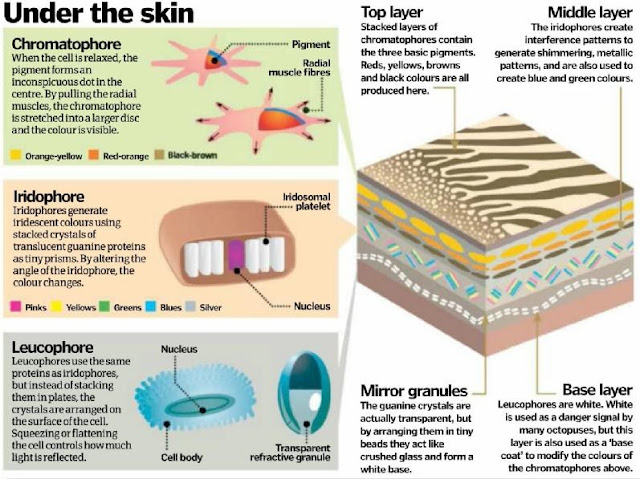 All the layers are controlled independently and simultaneously, so a cuttlefish can change its entire skin color in less than a second. Chameleons use a similar arrangement of skin cells but the chromatography are controlled using hormones, rather than nerve impulses, so the change occurs more slowly.

What's Brown and Sticky? A Stick! 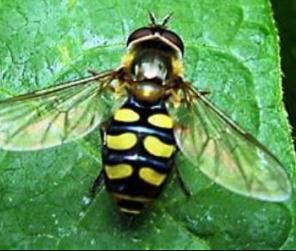 Camouflage is usually about blending anonymously into the background, but there are times when it is better to disguise yourself as something specific. Mimics copy the shape, colouring, movement and sometimes even the smell of another species to fool prey or predators. This is an evolutionary arms race; as predators evolve more and more acute senses to see through the subterfufe, so the mimics must constantly refine their disguise. 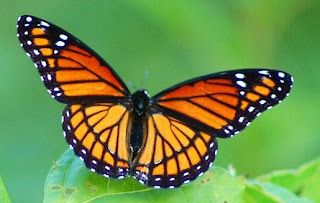 One of the most common forms of mimicry, known as "Batesian mimicry", is where a harmless species pretends to be a dangerous one, such as the many species of hoverfly that mimic stinging wasps. But poisonous species can mimic each other, too. Monarch and viceroy butterflies show this kind of ‘Müllerian mimicry’ - both are toxic, but they have evolved mimic each other so that bird predators only have to learn one wing pattern to avoid, rather than two.