Animal with Most Deadly Poison

Venom is a force multiplier. It allows small animals to tackle prey that approach or even exceed their own body size. Killing your prey with brute strength alone requires a large body, which in turn means thatyou need to catch more food to sustain it. Venom enables a predator to make a single strike from ambush and completely incapacitate its victim in less than five seconds. This is much more energy efficient than a prolonged tussle and eliminates the risk of injury to the predator.

Most venom is secreted by modified salivary glands. Ordinary saliva already contains digestive enzymes to begin breaking down food before it reaches the stomach. Venom probably first evolved in animals that killed their prey with a bite and then injected saliva to ‘marinade’ the meat so that it was easier to consume. After that, natural selection would favor those animals with evermore potent combinations of enzymes until the saliva itself did enough damage to kill the prey. Modern venom is often a cocktail of hundreds of different enzymes and peptides. As well as digestive enzymes, most species also include specific compounds that block the transmission of nerve impulses; this causes paralysis and suffocation.

Of course, while venomous animals are continuously evolving new toxins, their prey are also frantically evolving venom resistance. To counter this, most animals inject vastly more than the minimum lethal dose ofvenom with each bite. This guarantees the kill and also hastens it, which stops the victim from escaping to die alone, or injuring the predator.

Venom is less effective against large animals because of the time it takes to spread through the body, so larger animals are less likely to be venomous. The main exception to this is snakes, which use venom to compensate for their lack of claws to hold struggling prey in place. There are about 650 venomous species of snake but only a few venomous lizards. 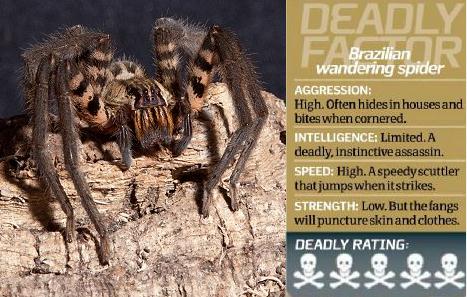 Wandering spiders do not spin webs. They stalk the forest floor at night and attack anything they come across, from insects to mice. In the day they hide somewhere dark and moist and this can bring them into contact with humans as they are often found near houses or in bunches of bananas. The Brazilian wandering spider has the deadliest venom of any spider — a neurotoxin two to five times more toxic than the black widow’s. The relatively low fatality rate of victims is thought to be partly because the spider will often ‘dry bite’ to conserve venom. Bites cause instant, intense local pain and swelling, followed by irregular heart rhythm, vomiting and internal hemorrhaging. 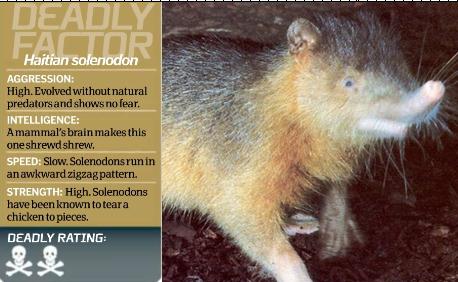 Solenodons are related to the shrew but much larger — about the size of a hedgehog. The word solenodon means ‘slotted tooth’ in Greek and these slots, or grooves, are used to inject the venomous saliva into their prey. They evolved on the islands of the Caribbean, without any natural predators. The introduction of cats and dogs has left them extinct everywhere except for Cuba and Hispaniola. The Haitian, or Hispaniola, solenodon is the more aggressive of the two and will attack without provocation. In the wild they eat earthworms and insects, as well as the occasional frog or lizard. Their venom is not lethal to humans but, in smaller animals, it causes paralysis, convulsions, bulging eyeballs and death. Interestingly, solenodons aren’t immune to their own venom. 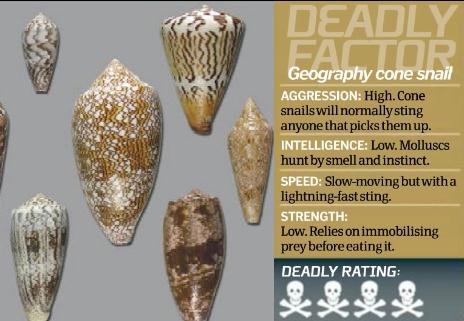 There are over 600 species of cone snail and all of them are venomous. Cone snails deliver their venom using a thin harpoon made from a modified tooth. This is fired from a flexible proboscis that enables the snail to tire in any direction, even directly behind it; this means that there is no safe way to pick up this gastropod. The venom of the cone snail contains over 200 different compounds that can paralyses a small fish in less than two seconds. The geography cone is a particularly large and venomous species. It can deliver enough venom to kill 15 humans in a single sting. There is no antidote; medical care consists of just treating the symptoms until the venom is metabolized. 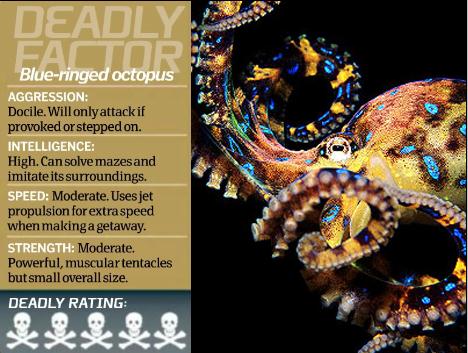 Although one ofthe smallest octopuses this is easily the most lethal. The main ingredient in its venom is tetrodotoxin, which is 10,000 times more toxic than cyanide. Tetrodotoxin is found in many other venomous animals, including cone snails, but it’s present in much higher concentrations in blue-ringed octopus venom. Bites are tiny and almost painless but, within ten minutes, the venom blocks the action of all the nerves that control the muscles. General paralysis and breathing difficulty ensue, but because the venom can’t cross the blood-brain barrier, the victim remains aware throughout. The paralysis even results in fixed, dilated pupils and rescuers may give up resuscitation attempts while the victim is still alive and conscious. 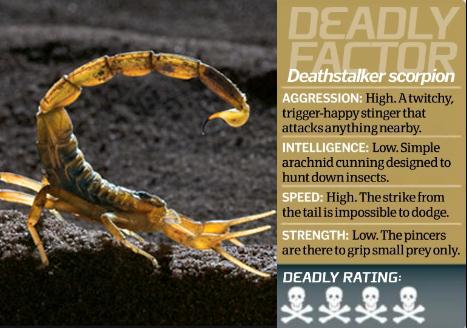 The deathstalker is the most venomous scorpion with a lethal dose of around a third of a milligram of venom per kilo of bodyweight. A cocktail of toxins causes heart failure and pulmonary oedema (fluid in the lungs). The deathstalker’s normal prey is locusts and crickets but it is a twitchy and aggressive creature that will sting anything that comes too close. Only its small size reduces the danger to humans; a typical sting only delivers 0.225 milligrams of venom and deaths are rare, except in small children and cases of allergic reaction. Nevertheless, anti venom is not as effective as it is for snakebites and a sting from a deathstalker is regarded as a medical emergency, even with prompt hospitalization. 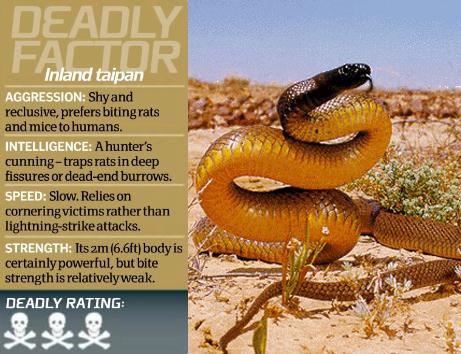 The inland taipan has the deadliest venom of any land animal; in fact, it is one of the most deadly substances of any kind. At least 40 times more powerful than the venom of a cobra, the lethal dose for a typical adult human is calculated to be around two milligrams; that’s about as much as the blood you lose from a mosquito bite. A typical bite injects enough venom to kill 25 humans, or a quarter of a million mice! Fortunately, the inland taipan lives in extremely remote parts of central Australia where it very rarely comes into contact with people. For such a deadly creature, it is also very shy and, despite its other name — the fierce snake — it never attacks unprovoked.
Posted by Tukang Warta
Share to: