Marvel Black Panther - The King Who Loves His People 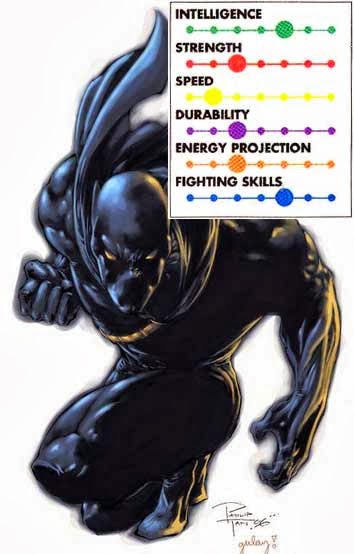 A powerful, cultured and noble monarch, T’Challa succeeded his father as king of the small, reclusive African nation Wakanda. Following his father’s murder, T’ChalIa was educated at the finest schools in Europe and America. He returned to his homeland with a degree in physics, eager to assume the mantle of leadership. To do so, he was required to defeat six of Wakanda’s greatest warriors in unarmed combat, and then obtain the secret heart-shaped herb that grants the country’s chieftains their great physical strength and enhanced senses. Successfully carrying out the dual challenge T’Challa donned the ceremonial garb of the Black Panther, totem of the Wakandan people. As chieftain of the country’s Panther Clan, he is the latest in a long line of warrior kings steeped in tradition, tribalism and a deeply nooted sense of honor.

Under T’Challa’s leadership, Wakanda has become one of the wealthiest and most technologically advanced nations on the planet. The country is home to the world’s only deposit of Vibranium, and extraterrestrial metal capable of absorbing all sonic vibrations. After meeting Captain America, the Panther was offered membership in the Avengers. Given the potential threat such as superhuman beings posed to his kingdom, accepting their invitation afforded T’Challa the opportunity to investigate their motives and intentions.

Taking a leave of absence from his royal duties, the Panther served among Earth’s mightiest heroes for a lengthy interval, acquainting himself with American methods of crime fighting. Although his initial intention were somewhat self-serving, T’Challa has come to consider the Avengers true friends and valuable allies.
T’Challa eventually returned to Wakanda, only to find the nation in the turmoil after his prolonged absence. After regaining his people’s respect, he worked to bring his country out of isolation from the rest of the world. He now must stand forever vigilant against those inside and outside Wakanda who would usurp the throne and plunder it riches. Always, T’Challa’s owes his primary allegiance to his people, and his actions are driven by their continued well-being.

A cunning creature of the night, the Panther manipulates global events with chilling ease and seeming emotional detachment, careful to remain one step ahead of his adversaries at all times. He is secretive and appears aloof, to the chagrin and bewilderment of friends and super hero allies. Due to his responsibilities of the state, T’Challa has denied himself the worldly pleasure his vast wealth would allow – and the happiness of life with his true love, American social worker Monica Lynne. To protect his kingdom, no price is too high for the enigmatic and unflappable king.